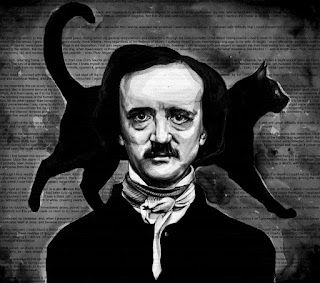 Ah, a series that I started with best intentions that, like so many things the last few years, fell by the wayside. But rather than wall it up in some damp catacomb, I’m going to try to revive it, mainly because I really want to revisit these stories.

I’ll begin with a story that was one of my favorites in my first few years as a Poe worshipper – “The Black Cat.” On revisiting the story, it’s really no surprise how much I loved it back then. It bears a striking resemblance to my favorite tale, and the one that started me on the journey, “The Tell-Tale Heart.”

Our narrator, a condemned man, tells a harrowing story of his descent into alcoholism and depravity, which changed him from a meek, easy-going animal lover to a murderous monster.

Like “The Tell-Tale Heart,” he begins by assuring us that he is not mad, then launches into his paranoid tale. Mind you, it’s not the perfect representation of paranoia and madness that “Heart” presents, but it’s still riveting.

We watch in horror as the disease makes him ever angrier and more violent until he gouges the eye out of his beloved black cat Pluto – another focus on an eye – and ultimately murders his pet, soon replaced by another black cat with a white patch which, at least to our narrator, appears to take the shape of a gallows. His attempt to murder the second cat is interrupted by his wife, who then becomes his victim. Her body, in a nod to “The Cask of Amontillado,” is sealed behind a wall in the basement.

The story again parallels “The Tell-Tale Heart” when investigators arrive, looking into his wife’s disappearance. It is with supreme confidence in his ability to conceal his crime that he greets them, and like the narrator of that tale, he gives himself away, though in less dramatic fashion.

From a perspective of 20-plus years later, I don’t find “The Black Cat” quite as compelling as I did when I was younger. It borrows heavily from several of Poe’s other tales and lacks the truly disturbing mastery of its closest relative, “The Tell-Tale Heart.”

The story is progressive in its presentation of alcoholism as a disease, which seems to be a more modern concept, and it does paint a pretty ugly picture of said disease.

While not as good as I wanted it to be after all these years, it’s still an enjoyable and fairly twisted little tale that’s worthy of a read.