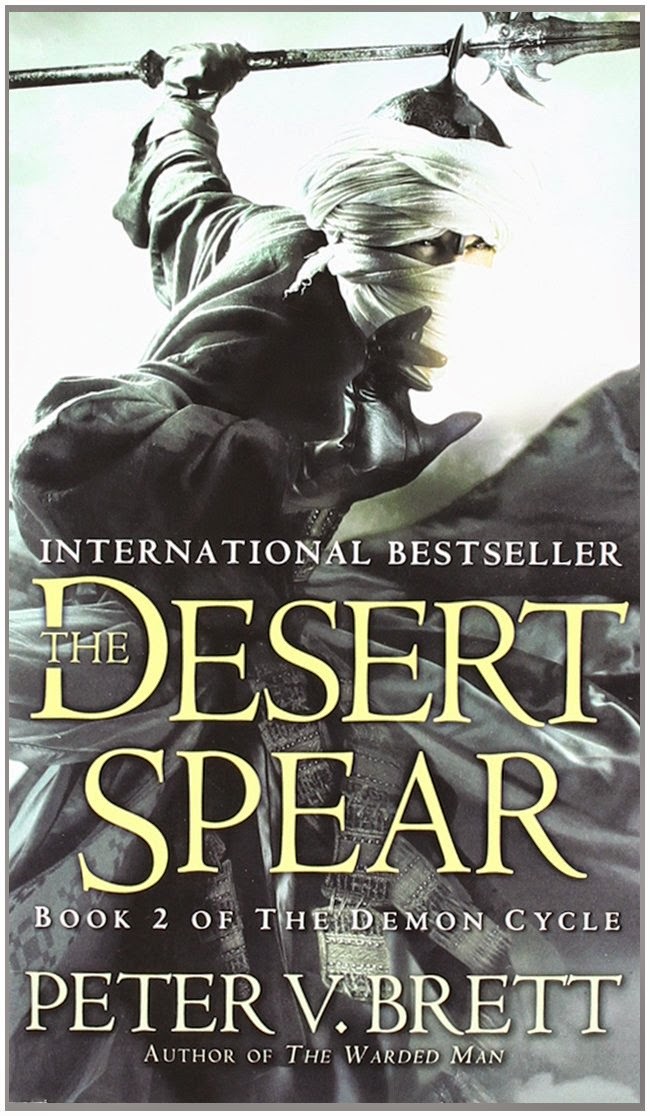 Peter V. Brett takes the reader by surprise a little in “The Desert Spear” ($7.99, Del Rey), the second book of his Demon Cycle.

In “The Warded Man,” we get a villainous picture of Ahmann Jardir that’s largely from the point of view of lead character Arlen Bales. In the follow-up, Jardir takes the spotlight for the majority of the first half of the book, and we’re left with a very different picture of the man who would be The Deliverer.

The early portion of the book takes us through Jardir’s young life, the beginnings of his friendship with the khaffit Abban, and the things that shaped the man who wields the Spear of Kaji. While there are still disturbing things about the man, we leave his tale with a much more sympathetic view of him and his motivations.

In the present-day storyline, Jardir has taken the role of Shar’Dama Ka, the Krasian version of The Deliverer. He has uncovered the secrets of Anoch Sun, first discovered by Arlen Bales, and has crossed the desert to bring the Daylight War to the greenlanders of Thesa, who he views as weak. He plans to subjugate and occupy their lands, while conscripting the able-bodied to join his fight against the night demons.

Meanwhile, Arlen, Leesha and Rojer, have molded Cutter’s Hollow – now called Deliverer’s Hollow – into a town of warriors, battling the plague of demons each night. Upon hearing of Jardir’s invasion, though, he must embark on another quest to unite the fractured dukedoms of Thesa against the new threat. Along the way, he’ll have to face some demons from his own past.

“The Desert Spear” takes what was already building into a good story in “The Warded Man” and amps it up even more with plenty of emotional punch and some surprising revelations about the Corelings that terrorize the humans at night.

The characters continue to be the driving force behind the success of Brett’s story. I’ve always enjoyed gray characters, those that can be equal parts hero and villain, and that’s really what Jardir becomes through the course of this book. I go from really disliking him at the end of the first volume to being fascinated by him by the time this book is done. His ways and methods sometimes seem warped to our modern sensibilities, but there’s no doubt that he absolutely believes himself to be doing what’s right and certainly seems to have a great chance to unite humanity against the common Coreling foe.

At the same time, Leesha, Rojer, and to a lesser extent, Arlen, continue to develop and change, molded by the events around them. And we even get a few new characters to hold our attention. One, in particular, has fascinating potential that’s barely tapped by the end of “The Desert Spear.”

In some ways, at the end, this does feel like a middle book. It contains a lot of background and setup and leaves things sort of in chaos with a big revelation that opens up all sorts of thoughts and possibilities. I’m actually glad that I’m a little late in starting this series. That means I don’t have to wait a year or more to find out what happens next.