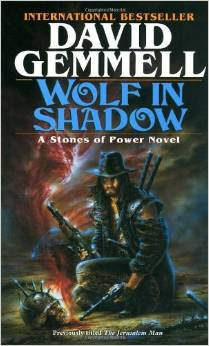 Reading Mark Lawrence’s latest novel, “Prince of Fools,” put me in mind of a writer I’ve long admired, but not visited with in a while – the late David Gemmell. So I decided to devote my next few Memory Lane pieces to his work.
Though I love Druss the Legend, arguably Gemmell’s best known character, it was not Druss that hooked me on his work. That distinction falls to Jon Shannow, The Jerusalem Man, and “Wolf in Shadow” ($7.99, Del Rey).

Technically, “Wolf in Shadow” is the third book of the Stones of Power series, but it is the first to feature Shannow, and the first Gemmell book that I read.

I believe that the third and final Shannow book had recently been released in the U.S. when I stumbled upon this one, in a discounted version to celebrate that release. I stayed up all night reading the book, and went back the next day to pick up the remaining two volumes, which I also blew through.

“Wolf in Shadow” introduces us to Shannow, a tormented soul wandering a post-apocalyptic landscape in search of lost Jerusalem. He has created a bit of a legend for himself in his specialty of violently ridding settlements of brigands that plague them, but he’s also disillusioned as the towns usually turn on him and drive him out when he’s done. With him gone, things return to what they were before.

Things change when he stumbles across the home of Donna Taybard and helps her and her son fend off the man who has risen to power in their settlement and is trying to strong arm her into selling her land through means that include the murder of her husband.

That encounter sets his feet on a path into cursed lands ruled by a violent band of devil-worshippers known as the Hellborn and their ruthless leader Abaddon, who seeks to dominate the world through the use of magical Sipstrassi stones, which have been corrupted and turned into stones fed by blood.

Nearly 20 years on after first reading “Wolf in Shadow,” I still find Jon Shannow a fascinating and intriguing character. Part Clint Eastwood’s High Plains Drifter, part Bible-thumping preacher, he’s a great big paradox with a grim attitude about life, yet a seemingly unshakeable faith that he’ll find what he’s looking for. What will happen when he gets to Jerusalem, he still doesn’t seem quite sure, but he knows that it will be better.

Shannow is brutally violent and batshit crazy, but despite that, still manages to be a good guy. Most of Gemmell’s characters were dark, but Shannow may be the most disturbed and, in turn, disturbing of the bunch.

“Wolf in Shadow,” like “Legend,” was written during a dark part of Gemmell’s life, as he dealt with his mother’s death from cancer, and the tone of the book reflects that. On second read, nearly two decades later, the Satan-worshipping Hellborn did, at times, seem a little far-fetched, but the themes of the book still rang true and Jon Shannow still provides much food for thought. I can’t wait to see how the other two books of his story hold up.