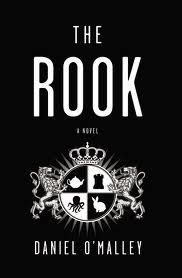 
She discovers that the former occupant of her body is part of the Chequy, essentially a supernatural version of MI6, charged with protecting the country from monsters, magic and other things the government doesn’t want the world to know exist. Oh, and she can also kill, blind or otherwise incapacitate a person with only a touch. Guided only by the notes and letters that the real Myfawny has left her, she assumes the role and begins an investigation that will shake the very foundations of the organization.

It’s pretty rare these days that I come across a story idea that intrigues me, but O’Malley had me from the first line: “Dear You, The body that you’re wearing used to be mine.” Granted amnesia stories are nothing new or groundbreaking in literature, but in this genre it’s a fresh enough thought these days to catch my attention. After finishing the book, I could also say that I hadn’t read a memory loss story quite like it before.

After hitting a couple of draggy fantasies lately, I was pleasantly surprised at how well the story moves along. O’Malley drops you into the middle of the fray, but has the challenge of filling the reader in on Myfawny’s background as she learns about it. I will admit that there were a few points in some of Myfawny’s longer letters to her future self that I thought, “just get on with it already,” but they were the exception. For the most part, the device worked and O’Malley kept the missives short and entertaining enough to keep me engaged.

Both versions of Myfawny are quite likeable, though I suspect her previous self would be a bit of a bore to read about. It helps more that she’s surrounded by a colorful and interesting cast of supporting characters, and there’s something strange and fun around just about every corner.

“The Rook” is a promising start to O’Malley’s career, though I wonder if he will continue the tale of Myfawny. There are certainly plenty more stories to tell about her, but I wonder if they can possibly be as interesting as this one. At any rate, it’s a thoroughly enjoyable tale, and I highly recommend it.