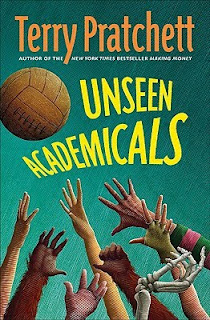 I’ve had an up-and-down relationship with Terry Pratchett’s Discworld novels in recent years. Pratchett remains one of my favorite authors and the early books in the series are some of my favorite ever. But over the last 10 or 12 years, the quality, at least to me, has been up and down. His latest, “Unseen Academicals,” falls somewhere in the middle of the spectrum. It’s not bad, but it’s not one of my favorites, either.

The wizards of Unseen University discover that a large donation to their cause is in danger if they don’t agree to field a football team. The football crowd is a rough and rowdy group, and the game has very few rules. The Patrician, the ever-scheming Lord Vetinari, has also taken an interest in the game and encourages the wizards not only to field a team, but to bring some rules and order to the game. Naturally, that doesn’t go over well with elements of the rough-and-tumble crowd dedicated to the sport.

In the middle of the chaos are a reformed goblin who has been sent to Ankh-Morpork to find worth, the son of a legendary football player who has sworn to his mother he won’t get involved in the game, a beautiful but somewhat dense serving girl who may turn out to be the Discworld’s first fashion model and a no-nonsense cook that tries to hold everything together.

Perhaps if I were a fan of soccer, the sports side of the story might mean a little more to me. Being that I’m an "ugly American" who believes that football is played with an oblong ball and should involve large, heavily-padded men colliding with each other, it doesn’t quite impact me as much. On the other hand, I did enjoy the story of Mr. Nutt, the goblin, who has been reprogrammed and sent into the world to prove that goblins can change. (They’re all innately evil, you know.) Nutt is, quite purposely, one of the most human characters in the entire book, and his journey is both amusing and, at times, profound.

The wizards, as usual, provide their share of comedic moments, whether it be a “traditional” game in which they chase a bird around the university, their ineptness at sports as they try to learn to play football or the head of the Department of Post-Mortem Communications, Dr. Hix’s, constant reminders to the staff that he represents the dark arts. (“Skull ring, remember?”) Most of the laughs come from their misadventures and there are some good ones.

“Unseen Academicals,” while far from Pratchett’s best work, is still an entertaining read and well worth the effort for fans of the author and the Discworld.