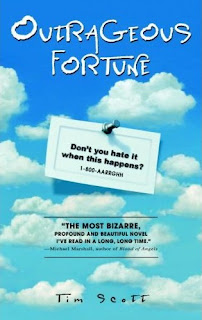 Jonny’s having a really bad day. He’s just come home to find out his entire house has been stolen. In its place, he finds a card that says “Don’t You Hate When This Happens?” with a phone number. He’s had a fight with his girlfriend. He’s about to be abducted by four bikers who have named themselves after the four horsemen of the apocalypse who want him to assassinate God, and he’s being hounded by a militant encyclopedia salesman.

Scott’s debut is a zany, fun and inventive ride that reads like Douglas Adams, Terry Pratchett and Christopher Moore sitting down for a book club discussion of William Gibson’s “Neuromancer.” It’s often funny and just a little goofy. Scott creates a world where record companies have taken over California, and everyone lives in zones that are based on their listening preferences. (I was a bit disappointed that we didn’t at least get to visit Heavy Metal in the course of the novel.) Elevators tell knock-knock jokes and long to travel, people have phones and debit systems transplanted into their bodies, humans can catch ad viruses that pop up around them randomly and one of the hottest spots around is the most inconvenient bar in the world.

But under the flashy world and fun, there is a very serious side to the book. Scott presents, in a light-hearted way, some very real criticisms of our technology driven world, our search for convenience and our loss of privacy. There’s certainly a little bit of Orwell’s Big Brother in the Zone Securities police force which tracks people through implanted chips and can seemingly arrest and dispose of them with impunity. There’s also a warning here about the dubious uses of technology in the wrong hands, though I won’t go into that because I don’t want to spoil anything.

“Outrageous Fortune” opens with a strange and intriguing scene and continues to delight with its oddball world and keep the reader interested by the unfolding puzzle of a plot. It’s a great debut from a promising new voice.