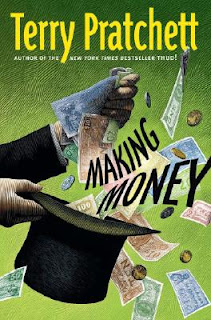 Once upon a time, a new Terry Pratchett novel was mandatory reading for me, but I just haven’t found his last few books as funny as expected. I’ve even missed a few completely over those years. So I opened “Making Money” ($25.95, HarperCollins), it was without the excitement that I once had.

The book returns to the story of the unfortunately named Moist von Lipwig, introduced in “Going Postal.” The former con man was given a new lease on life in that book when Lord Vetinari, the patrician of the city of Ankh-Morpork, spared him from execution to put him in charge of the floundering post office. In a few years, Moist has used his former criminal skills to get the post office running more smoothly than ever.

Now, Moist is bored and has returned to his criminal ways, in secret, for some excitement. The city also has another problem — its banks are failing. Vetinari once again turns to Moist to “persuade” him to take over the royal mint. Throw in the conniving family of the late chairman who want to seize control of the mint, an assassin’s guild contract and a girlfriend who is head of a golem liberation organization, and you’ve got all the makings of a zany Pratchett tale.

Once again, though, “Making Money” just doesn’t stack up to past Discworld offerings. The book will hold the interest of Pratchett fans, but don’t expect many laugh-out-loud moments, just a chuckle here and there. The satirical element of Pratchett’s work does run through the entire book as he takes stabs at several social and political issues, but it’s not quite as cutting as he’s been in the past.

The characters here also don’t seem as colorful and well-realized as some of Pratchett’s past heroes and villains. Maybe its my affection for older characters like Rincewind the Wizzard, Granny Weatherwax and, of course, Death, but most of the new characters don’t seem to connect the way those did. (This from the guy who was happy to see new blood in the books just a few years back.)

Storywise, the book is interesting and enjoyable, and it’s a step above some of his considerable output over the past decade or so, including “Going Postal.” If you’re new to Pratchett, though, I’d advise digging back into the Discworld catalog before trying out the newer volumes.

Read my reviews of past Pratchett novels. (Please note that some of the first reviews on this page are very old and rudimentary.)