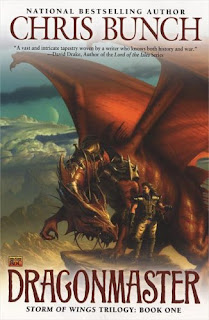 Most of my reading lately has been in the corners where the world of faery intersects our own world. It's been a while - far too long, in fact - since I dived into a good, old-fashioned sword and sorcery story. After all, those are the tales that first hooked me on the fantasy genre.

Looking over my stack of unread books, I decided that Chris Bunch's "Dragonmaster" ($15, Roc) would fit the requirements nicely. I've got a soft spot for a good dragon story, and Bunch delivers.

Hal Kailas is a young man staring at a grim future of working in the local mines when he rounds a corner one day and finds a nobleman's son tormenting a young dragon. He stops the torture and returns the dragon to its nest, but when the nobleman threatens to make his family miserable because of the incident, Hal is forced to leave his village.

With dreams of flying a dragon, he hooks up with Altheny, who runs a traveling dragon show and promises to teach him to ride. He has good life with the man, but learns very little. Then, with war brewing, Altheny gambles away his dragon business, leaving Hal on the streets. Before he can raise the money for passage home, he's conscripted and finds himself on the front.

He gets another chance at his dreams when the army announces the formation of dragon-mounted troops to combat those of the enemy Roche army. He signs up, and finds himself on the front lines of a long and brutal war.

Bunch's tale takes a little time to build, but once Hal is enlisted, the action comes at break-neck speed. You get the feeling that Bunch is a military man. His battle scenes present visceral images of the chaos and carnage of being on the front lines. There's also a dark humor in the string of foppish, unqualified commanders Kailas finds ignoring his intelligence and sending the army to disaster time after time.

Bunch's use of dragons in battle is interesting. Since his dragons don't have flaming breath, you might expect the standard lance and sword duels from dragonback that you see in other books (never mind the fact that it would be very difficult to get close enough to have a sword duel on dragonback). Instead, Bunch uses his dragons more like modern fighter planes, developing strategic and effective weapons for his dragonriders to use.

Bunch's writing style can be brusque at times. It seems a bit strange in the more leisurely approach to the first half of the book, but it's quite fitting for the military fantasy of the second half.

The ending of this first book in the series, while not the cliffhanger type that I hate, was still a bit unsatisfying. Few issues were resolved and Kailas was only in a slightly better position than when the war started. It will be interesting to see how the situations Bunch has set up will play out in later volumes.