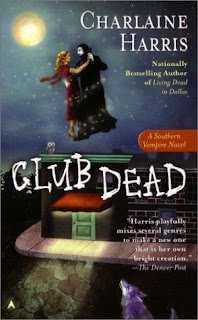 A lot of folks might roll their eyes at the mention of a vampire story, but when it happens in your own back yard, it's a different matter. In "Club Dead" ($6.50, Ace Books), Charlaine Harris returns to the fictional northern Louisiana town of Bon Temps and her heroine Sookie Stackhouse.
This time, Sookie's vampire boyfriend Bill Compton disappears while on a secret mission from the vampire queen of Louisiana, who has sent him to treat with the Mississippi faction. The Louisiana vampires can't risk a war with Mississippi by moving openly to find him, so that leaves it up to Sookie and her guide, a suave werewolf named Alcide Herveaux.
But Sookie isn't sure she really wants to find Bill. She's discovered that at least part of the reason he went to Jackson was to meet a former lover, another vampire. In fact, Sookie's not entirely sure that Bill even wants to be found.

Before you roll your eyes at the plotline, know that this isn't your typical vampire novel. If you're imagining a redneck Lestat, think again. Harris' vampires are rougher and less refined than Rice's, and these books don't take themselves too seriously. Unlike many vampire novels with dark, gothic moods, these books are intended to be fun - and they are. Quite a lot of fun, in fact.

While the town of Bon Temps is fictional, there are plenty of local landmarks for readers to associate with. During the course of the stories, action happens in Shreveport, Jackson, Ruston and even right here in Monroe.

Harris, who lives in Magnolia, Ark., is also able to capture the character of our area pretty well. While I did groan at a few stereotypical characterizations, I also had to admit that for the most part, she gets it right.

As an added bonus in "Club Dead," Harris offers a possible explanation for quite a few tabloid stories in the character of Bubba. I won't reveal the secret. I'll leave that to the reader to find out, but it's an original idea that had me rolling with laughter.

"Club Dead" is the third in Harris' "Southern Vampire" series, and it's just as lively and entertaining as the first two. They're part horror and part mystery with a healthy dose of biting (pardon the pun) humor.