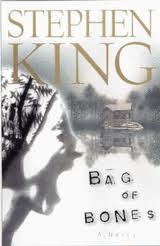 I have a love/hate relationship with Stephen King. Either I really like his work, or I really hate it. While I count books like It, The Stand and the Dark Tower series among some of my favorites, others like Cujo and Christine hold no interest at all for me.

Bag of Bones thankfully falls into the former category. It's a bit of a new direction for King. While it's a dark piece with plenty of ghosts, the supernatural element really doesn't take center stage until the very end of the book. Until that point it's basically the story of a writer trying to find himself after his wife's death, and his attempt to help a young girl and her child.

Instead of harrassing his characters with the supernatural around every corner, King shows us that the ghosts are not always the real monsters.

I would have to rate this book among King's most well-written, and it has renewed my interest in him after a few groaners like Gerald's Game.

Even if you've been turned off of King in recent years, I think this one might be worth checking out.