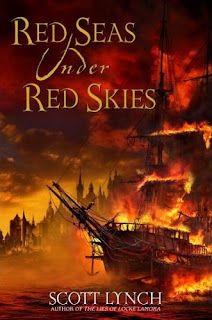 I was very impressed with Scott Lynch's debut "The Lies of Locke Lamora," which I read a few weeks ago and eager to jump into the second volume, "Red Seas Under Red Skies" ($23, Bantam Spectra).

Some time has passed since Locke and partner in crime Jean Tannen fled Camorr after the events of the first book, and their relationship has, at times, been strained in those years. The book opens with a huge hook, the ever-loyal Jean seemingly betraying Locke, which makes the reader wonder what might have brought them to that pass. It takes about 500 pages to find out, and that's one of the weaknesses of this book compared to "The Lies of Locke Lamora."

Like the first book, "Red Seas Under Red Skies" takes some surprising turns and leaves the reader wondering how Locke and Jean will pull of their capers and what's going to go wrong next. The two have fled to Tal Verrar, gotten things back together and are working on a scheme to rob the Sinspire, a high-stakes gambling house for the very wealthy. They're nearing the completion of the two-year plan when they get a threatening message from the Bondsmagi of Karthain, after the pair for injuries inflicted on one of their own in Camorr. Then, Locke and Jean begin to encounter assassins after them for some unknown reason and get drawn into a scheme involving the Archon, who hopes to essentially become a dictator.

And there's where the story begins to break down. It seems that Lynch has woven one too many threads into "Red Seas Under Red Skies." With "The Lies of Locke Lamora," the action began early and didn't let up. In this book, there's a huge lull. The Sinspire scheme of the beginning is intriguing, though not shaping up to be as interesting as the first book. Then there's the encounter with the Archon and a lot of perhaps necessary, but dull space as they dance around with the Archon, Sinspire owner Requin and train to pass themselves off as seamen.

Once they're aboard the pirate ship that they end up on, things pick up again, but ultimately it doesn't all mesh together the way the multiple storylines in "The Lies of Locke Lamora" did. It feels almost as if Lynch got lost somewhere in the middle and lost sight of where the book was going, then zipped it back up at the end.

The characterization is still just as strong as the first book. This one is loaded with colorful players, and we see a lot of development with Locke and Jean. For me, Jean really eclipses Locke and emerges as the hero in this book. There are also a lot of secondary characters here that I'd like to read more about, so Lynch has left himself some possibilities for future volumes.
"Red Seas Under Red Skies" is certainly still an enjoyable book despite the lull in the middle. When things are clicking it's great fun, and it ends with an incredible flurry of action and a few central questions to carry forward. It's definitely worth a read for those who enjoyed "The Lies of Locke Lamora."