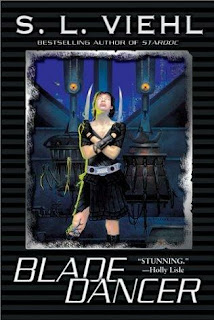 S.L. Viehl has already made a name for herself in the science fiction world with her "Stardoc" books, but now she introduces a new character to that universe with "Blade Dancer" ($22.95, Roc).

Jory Rask is a pariah on the xenophobic world of Terra. She's a half-breed, the product of a brutal rape of her Jorenian mother by a Terran mercenary. Blessed (or cursed) with a Terran appearance, she's been able to hide her heritage through the use of a pair of gloves (to conceal her sixth finger) and goggles (to hide her pupil-less eyes.) She's done fairly well for herself, becoming one of the top runbacks in the professional shockball league (basically the science fiction equivalent of Deuce McAllister.) But when her mother dies, that all ends.

Jory is caught burying her mother in the desert, and her heritage comes out. The formerly honored player is mistreated, shunned and deported.

She catches a flight to her mother's homeworld in hopes that they'll take her in, but along the way, she runs into a blade dancer, one of a group of elite galactic assassins. He takes an interest in her, challenging her to a fight and inviting her to the planet Reytalon for training.

Jory refuses, but once she gets to her mother's homeworld, she doesn't get quite the reception she expected. Furthermore, she discovers it's not really a place she wants to live. So, keeping a promise to her mother, she seeks out the handful of others on the planet like her. When she locates them they find a common bond and a common goal, revenge against Kieran, the Terran mercenary responsible for their outcast existence.

On the surface, "Blade Dancer" is a typical revenge tale, but Viehl handles it with a flair that makes it far more engaging than the average action movie fodder.

For one thing, Jory is a very believable character. Though she sports the stoic façade of the average action hero, there are aspects of her character that reveal her as a real person with real feelings and fallibilities. The reader is able to feel for her and sympathize with her even as she's training to be a cold-blooded killer. Though some aspects of that training may repulse readers, they still feel that connection with the character. That's a balance that's sometimes hard to achieve.

Perhaps the most refreshing thing about "Blade Dancer" is its honesty. While a lot of science fiction writers try to dress an adventure tale up in heavy-handed philosophical trappings, Viehl's writing style is as unpretentious as this tale of revenge.

She never pretends the novel is anything but what it is - a breathless action tale that will keep readers turning pages.