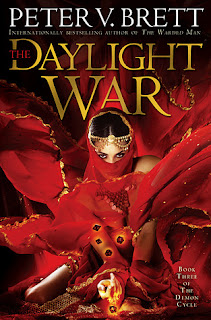 There’s still more history to learn, but business really starts to pick up in Peter V. Brett’s “The Daylight War” ($8.99, Del Rey), the third volume of the Demon Cycle.

Ahmann Jardir, the self-proclaimed Deliverer, continues his war of conquest in preparation for Sharak Ka, but the demons of the night, too, are ramping up their efforts, having for the first time in many years met resistance from their human foes. The Waning is coming, the time of the new moon, when the more powerful alagai princes are able to walk the world. These princes can unite the demon drones for strategic attacks the likes of which humans have not seen.

Arlen Bales, who has begun to unlock the secrets of the alagai and grown greatly in power, returns to Cutter’s Hollow to find it a changed place. A count, Thamos, has moved in with his army and taken control, and Arlen discovers that his friends Leesha Paper and Rojer Halfgrip have gone to treat with the enemy, Jardir, who wants Leesha to become his northern Jiwah Ka (first wife). Arlen must prepare the Hollow folk and himself for the biggest battle so far.
Read more »
Posted by Fred Phillips at 3:18 PM No comments:
Labels: Book reviews, Demons, Fantasy, Magic, Peter V. Brett, The Demon Cycle
Newer Posts Older Posts Home
Subscribe to: Posts (Atom)