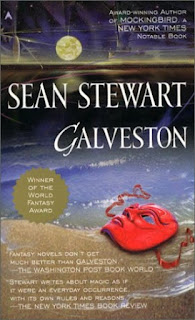 When I first pulled Sean Stewart's "Galveston" (Ace) out of a box of books on my desk, several people around me looked at it strangely. They couldn't imagine what could be so fantastic about Galveston, Texas. Now, I can.

Galveston has been covered by floods and battered by hurricanes in its long history - but during Mardi Gras 2004, the island is covered by a flood of a different sort. Magic has been leaking into our world for years, but in 2004 it breaks through completely, throwing the city, and presumably the rest of the world, into chaos.

Years later there are two Galvestons competing for dominance. One is the non-magical Galveston, where a few Krewes, made up mostly of the rich, run the show. They still enjoy many of the luxuries they had before the flood. But the poor of Galveston - and those who are not members of a Krewe - live in squalor.

The other Galveston is the world of magic, a world that's been trapped in Mardi Gras since the flood. This Galveston has taken its toll on the people, too, transforming them, sometimes in horrific ways.

The gatekeeper between the two worlds is the Recluse, a witch who keeps magic confined to the Mardi Gras. She's tapped Sloane Gardner as her replacement. Unfortunately, the Grand Duchess, Sloane's mother, also wants her to carry on the Gardner tradition in the Krewe of Momus, and even the god Momus himself has his eye on her. Despite the power they would bring, Sloane wants none of these burdens.

Joshua Cane is an apothecary handing out primitive medicines that, in many cases, do next to nothing for the illnesses he's fighting. With most of the real medicine from before the flood gone or in the hands of the rich, he's frustrated as diseases that should be easily treatable claim lives. Once a member of a socialite family, Josh has fallen into disgrace after his father lost the family home in a poker game. He's dreamed of returning to the status his family once enjoyed, and he's also dreamed of Sloane Gardner.

When Sloane shows up in his office, injured and dazed after emerging for the Mardi Gras, Josh thinks his dreams have come true. But those dreams are about to turn into nightmares.

In "Galveston," Stewart blurs the line between fantasy and mainstream fiction. He provides an intriguing world, awash with magic, but at the same time the focus is on character. Even though magic is essential to the tale, and we see wondrous things around every corner, it doesn't distract from the real heart of the tale - Sloane and Josh coming to grips with their lives.

Both characters are discovering themselves, and not really liking what they find. Josh has helped a lot of people with his medicines, but he's cold and businesslike, not earning the respect or friendship of any of those people. He only begins to realize this when he's put on trial for Sloane's murder, and no one will stand for him. In fact, some of the people he's helped speak against him.

Sloane, on the other hand, has to face her own reluctance to accept responsibility. She would rather retreat into the Mardi Gras than face the fact that Galveston and her mother may need her. With the help of Joshua's father Ace and her Mardi Gras alter ego Sly, Sloane begins to learn more about playing the cards she's been dealt to her own advantage.

While "Galveston" has an interesting premise and is a wonderful read, it does have one weakness. The ending of the book left me with more questions than it answered. While there was some measure of resolution for the characters, it seemed that few of the other problems of the book had been resolved.

The setting of the novel left me wanting something more, as well. Stewart's rendering of Galveston was rich and fantastic, with some key details that put the reader on the spot. But it did lead me to wonder what the rest of the world was like following the flood of magic. We know that there are cannibals near Beaumont, and when Josh and Ham are exiled, we see that there are more pockets of magic like Galveston's own Mardi Gras. But what about the rest of the world?

Despite the lingering questions, "Galveston" was still a great read. It strikes a perfect balance between a magical fantasy world and the gritty realism following a natural disaster. I had never read Stewart before "Galveston," but I've got a feeling I'll be delving into some of his past work in the near future.
Posted by Fred Phillips at 2:24 PM No comments:
Labels: Book reviews, Fantasy, Magic, Mardi Gras, Sean Stewart, Urban Fantasy
Newer Posts Older Posts Home
Subscribe to: Posts (Atom)