Review: "Dead on My Feet" by Wm. Mark Simmons 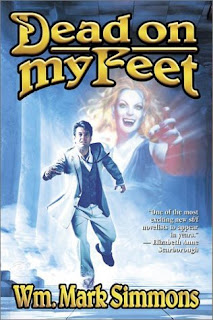 Having grown up in this area, I never suspected there'd be a vampire presence here, but now the place seems to be overrun with them.

Simmons began the story of Cséjthe (pronounced Chaytay) in 1996's "One Foot in the Grave." Even in a world of vampires and werewolves, Cséjthe is an oddity. He's neither living nor dead, a half-vampire. Simmons' variety of vampirism is a virus with two parts. Cséjthe got one, but not the other, which makes him of great scientific interest to all of the vampire clans (which seem more like Mafia families).

Cséjthe just wants to be left alone with his werewolf girlfriend Lupé (and don't forget the ghost of his dead wife), so he packs up and moves to a most unlikely place. You guessed it - right here in Monroe. He's provided a new identity - Sam Haim - and opens a detective agency.

When he's hired to check out a local psychic, he expects a quick debunking. Instead, he gets a dire warning. The story that follows is a wild ride that includes a killer virus, a global conspiracy and an army of long-dead Civil War soldiers. Oh, and did I mention that the vampire clans finally catch up to him?

Simmons says his books are not your typical vampire novels, and he's not kidding. There are no overwrought, Goth-poet, tortured souls here (OK, maybe a couple, but they're bearable). Instead his characters are more like real folks with real problems on top of their supernatural woes.

Simmons has never met a pun he didn't like - a trait that he's quick to cop to - but in these novels, as well as in his "Dreamland Chronicles," they usually seem to work. You'll hit a groaner every now and then, but for the most part, the puns enhance the humor.

Part of the fun of reading Simmons' books is picking up on all the references. Sprinkled throughout are allusions to movies, music and all things pop culture. You'll get some and miss some, but there should be a few for everyone.

"Dead on My Feet" and "One Foot in the Grave" are a good mix, blending plenty of light and funny scenes with some dark and downright menacing moments. It also helps that the first book features one of my favorite lines from a vampire novel. Cséjthe is practically forced to attend a support group in the vampire enclave to help him deal with the changes (yes, they have support groups). When he's asked to speak, he stands up and says, "I suck, therefore I am."

Unfortunately, "One Foot in the Grave" is out of stock in most places right now, but Simmons hopes it will be back on shelves soon. Until then, you can still enjoy "Dead on My Feet" as a stand-alone and catch up on the backstory later. It's a lot of fun, and you might find a few things you recognize. 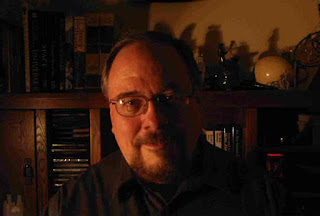 Mark Simmons leads a secret life. He has quite a few skeletons (mostly of Civil War soldiers) in his closet. He hangs around with werewolves and voodoo types. He has bloodthirsty friends. Surprisingly, he wants everyone to know about it.

Simmons, who has been general manager and program director at public radio station KEDM for about 10 years, can not only be found on the airwaves, but on bookshelves as well. His latest novel, "Dead On My Feet," was released by Baen Books earlier this year and brings his half-vampire character Chris Cséjthe home to Monroe.

Simmons, tired of seeing every story set in New York or Los Angeles, wanted to offer a different view, but he admits, initially, to having second thoughts about bringing vampire clans and ghouls of all sorts to town.

"Whenever you set something in familiar territory, it helps ground the story," he said. "But there's also the external aspect of people wanting to think that you mean something or you're saying something about the real place. Whenever an author writes something, there are always friends and acquaintances who try to figure out if they're in the book."

Simmons assures local folks that none of them appear in the book, though the name of one prominent local restaurateur is mentioned. He admits to including some friends, but no one from our neck of the woods.

Then there are some of the events of the book, which include a white supremacist group - from up north, no less - in a battle against long-dead Civil War soldiers (Union and Confederate alike) who are protecting their country, and a corporation with a killer virus bent on world domination. Those were other reasons he chose not to use real places and faces.

"Sometimes people will misunderstand things you're trying to do, especially humor," Simmons said. "I was thinking, if somebody skims this, they're going to think, `well, here comes another Yankee, writing another story to make fun of us.' If I made fun of anything, I did make fun of the fact that our life here is kind of quiet."

That quiet life is part of what initially drew Simmons to Monroe. He worked at radio stations in southeastern Kansas and the Kansas City area in Missouri before turning to public radio. He had a choice between accepting a position as operations manager and program director at KEDM or one in Bridgeport, Conn.

"It was a tough decision," he said. "But it was so beautiful down here, and what impressed me was the strength of the arts."

A year after joining KEDM, Simmons also took on the duties of general manager, and he's now an adjunct instructor in mass communications at the University of Louisiana at Monroe. All of which leaves little time for writing, but he still manages to churn out books, if at a bit slower pace.

Simmons thinks one of the things that attracts readers to his books is the strange blend of genres. His "Dreamland Chronicles" trilogy layers a fantasy tale on a hard science fiction framework, while the Cséjthe books blend fantasy and horror with a touch of science fiction thrown in. But all of the books have a common element - humor.

"For balancing humor and horror, I admire Hitchcock for what he was able to do," Simmons said. "He can make you believe in some scary situations, but still make you laugh."

Simmons said he likes to think that his books achieve that same kind of balance. He wants them to be funny, but he also wants readers to take the story seriously. His publisher for the Cséjthe books thinks he's achieved that goal. Toni Weisskopf, executive editor of Baen Books, said several people had recommended Simmons' work to them before they read "One Foot in the Grave."

"Once we read it, we enjoyed Mark's storytelling and his wry, allusive sense of humor," Weisskopf said. "Mark's hero has to walk the fine line between what's wrong and right, and it's rare these days to have an author who knows where the line is drawn, let alone can deal with moral decisions with such a light touch. Simmons manages it with flair."

While the books are funny, Simmons doesn't want people to get the idea that they are for kids. They draw on legends and history, which are often bloody. He said he'd classify them PG-13 with the movie ratings system.

"There are worse things you'll see on TV on most given nights, but it's not `Bunnicula' or `The Monster Patrol,'" he said. "There is violence and there are bad things that happen to some of the people in these books. The most horrific stuff is actual history."

Simmons, though he says he's not a fan of vampire stories himself, said he does try to stick with the conventions of the genre. He began writing the stories as a way to have a little fun with "the genre that will not stay dead," but he also has respect for the conventions. So sunlight, holy symbols, garlic, all of the usual suspects play a big role in his books.

That, he says, earns him some fans from the community of vampire followers. Much like his poking fun at fantasy and science fiction have earned him fans among those genres.

"I'm true to the rules, and yet, we all have a little bit of a `Mystery Science Theater 3000' attitude after a while," he said. "How many times can we go back to the coffin and tell the same story over again without it just being old?"
Posted by Fred Phillips at 7:59 PM No comments:
Labels: Christopher Csejthe, Dreamland Chronicles, Fantasy, Horror, Interviews, Urban Fantasy, Vampires, Wm. Mark Simmons, Zombies 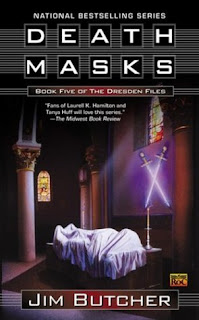 Settling down with the latest installment of Jim Butcher's "Dresden Files" is becoming a pre-Halloween tradition for me.

The tales of a wizard private eye are the perfect books for the haunted season. They've got plenty of creeps and nasties, but they're more fun than frightening. His latest, "Death Masks" ($6.99, Roc) continues the trend.

This time, Harry Dresden's in a world of trouble (as usual). The war between the Red Court of vampires and the White Council of wizards - a war that Harry was at least partially responsible for starting - continues. Harry is given a chance to end the war by fighting a duel with a representative of the Red Court, a cunning vampire named Ortega.

As he prepares for the duel, he gets a visit from a representative of the Vatican. The Shroud of Turin has been stolen and is suspected to be in Chicago. The priest has contacted the police, but doesn't trust them and has been pointed toward Harry. The problem is, a lot of other people are looking for the Shroud, including Harry's friend Michael Carpenter and two other Knights of the Cross, the local crime lord and some really nasty demons.

Could anything else go wrong? You bet it could. In the middle of all of this Harry's old girlfriend, now half-vampire, saunters back into his life.

As you can probably tell, this tale of Harry Dresden is far from boring, but it's not nearly as chaotic as it sounds either. Despite everything that's going on, Butcher still makes the story flow and manages to tie it all together.

But most importantly, the stories are a blast. Butcher doesn't mind poking fun at his own genre, even at a master of it. Consider a scene where Dresden is caught somewhere he shouldn't be - an art auction run by the local mob boss where Harry suspects the Shroud will be sold. The mob boss confronts him by saying he didn't realize Harry was an art collector. The rest of the conversation goes like this:

"`I am the foremost collector of velvet Elvii in the city of Chicago,' I said at once.

"`The plural could be Elvises, I guess,' I said. `But if I say that too often, I start muttering to myself and calling things `my precious,' so I usually go with the Latin plural.'"

If that passage gives you a chuckle - or a good belly laugh if you're a Tolkien fan - there are plenty more where it came from.

With most ongoing series like this, I find my interest waning after four or five books, but five books in, I still love the "Dresden Files." They're fast, they're fun, and I'm looking forward to the next one.