Review: "Owl and the Electric Samurai," by Kristi Charish 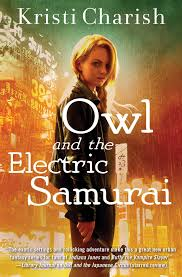 In her third adventure, “Owl and the Electric Samurai” ($18, Simon and Schuster), things get even more sticky for Kristi Charish’s antiquities thief Alix Hiboux, better known as Owl.

As the book opens, Owl finds her loyalties divided and about to be divided further. She’s trying to retrieve artifacts for her dragon boss, Mr. Kurosawa, being pressured by the IAA to find the two creators of the World Quest game and being tempted by the possibility of stumbling into the fabled land of Shangri-La.

All of those things come together when she’s called home and given a new assignment by Kurosawa, to retrieve an ancient and magical suit of armor last worn by one of Genghis Khan’s generals. Dubbed the Electric Samurai by Owl, the suit has been missing since that time, and the faction that now wants it raises concerns about the stability of supernatural society.
Read more »
Posted by Fred Phillips at 10:25 AM No comments:
Labels: Adventures of Owl, Book reviews, Dragons, Elves, Fantasy, Horror, Kristi Charish, Urban Fantasy, Vampires 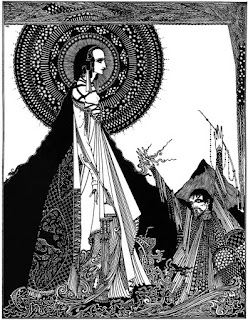 If ever there were a Poe tale that I almost gave up on in my youth, it was “Ligeia.” As I started this story for the first time, I remember asking myself where was the Poe that I knew and loved. Where was the neurotic and deranged narrator? Where were the creepy horrors? Why was this guy spouting pages of praise for the beauty of his now-dead love? Romance has no place in my tales of terror.

Of course, I came to realize over the years that there was more depth to Poe than creepy-eyed old men, deadly diseases, living burial and the like, and while “Ligeia” still wouldn’t be my favorite story by a long shot, I came to appreciate it more.

The story tells the tale of a man who loses the love of his life. While he was singing the praises of her beauty and presence, though, the younger me failed to notice that, indeed, this subject does have some of the deranged tendencies of Poe’s unfortunate narrators. If nothing else, he’s certainly obsessed with his lost love, yet for all those lavish details, he claims to be unable to remember how they met and isn’t sure that he ever knew her surname.