Review: "The Tough Guide to Fantasyland" by Diana Wynne Jones 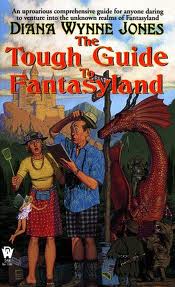 (Editor's note: This review was written for a previous version of the site back in the late 1990s that featured a writer's page which no longer exists, though perhaps it should.)

I thought for a while about where to put this. I almost think it should go on my writer's page, because fantasy writers could definitely use the information contained in this book. Finally, though I decided to put it on the regular page, because you don't have to be a writer to enjoy this one.

Jones takes a hilarious jaunt through the typical "fantasyland." This tour hits all the major cliches, some I had never even noticed before she pointed them out. After reading her take on them, though, I thought "oh, yeah. That does pop up a lot."

The "tour guide" is arranged alphabetically, in a dictionary fashion, and she hits every cliche from "Adept" (One who has taken what amounts to the Postgraduate Course in Magic) to "Zombies" (...just the undead, except nastier, more pitiable and generally easier to kill.) And there are no shortage of stops in between. Watch out for the official management terms as well. You've seen them before whether you realize it or not. ("reek of wrongness").

This is an entertaining book for fantasy fans who have read one too many cliche, and it borders on being an indispensable reference for writers to avoid those pitfalls. Mainly, though, it's just funny. Check it out. 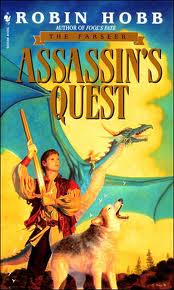 This is a series that I hated to see end. It's been a while since a set of books captured my imagination like these three did.

This is the final installment of the story of Fitzchivalry the assassin and company, and it's also the best book in the series. Hobb creates characters that come to life on the page - characters that you know and care about.

I'm a sucker for a good wolf story anyway, but one of my favorite parts of this series is the bond between Nighteyes and Fitzchivalry. It brings needed drama and humor to the series. Hobb also takes an interesting view of dragons - another topic I'm a sucker for. Anytime an author can approach dragons from an angle I haven't seen before, as Hobb does here, I'm interested.

One word of warning to those of you who want an ending where everyone lives happily ever after. You might not want to get too involved in this one. While the ending is not exactly tragic, it's not the typical happy ending - another thing I like about it.