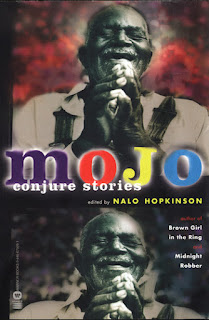 When she emerged on the scene through the Warner Aspect First Novel Contest a few years ago, Nalo Hopkinson was hailed as a breath of fresh air in the science fiction and fantasy world. Her first two novels "Brown Girl in the Ring" and "Midnight Robber" and a short story collection "Skin Folk" have earned awards and critical acclaim.

Now Hopkinson tries her hand at editing with the collection "Mojo: Conjure Stories" ($13.95, Warner Aspect.) The good news is that she's just as adept at choosing stories as writing them.

The 19 stories in "Mojo," all focus on the spiritual and magical beliefs of western Africa, the source of the term mojo and much of what it stands for. The book contains a nice mix of well-known authors (Neil Gaiman, Tananarive Due, Barbara Hambly) and relative unknowns who have stories to tell that are just as good, or sometimes better, than their more popular counterparts.

The collection takes the reader on a ride through time from the days of plantations to the present. It also offers insights into a culture that has been largely overlooked and a belief system that has been lost to most of the world.

While many people are aware of these traditions, their knowledge goes no farther than the storied voodoo doll (a stereotypical symbol which "Mojo" happily avoids). While the tales in the book are mostly fantasy and horror, they still manage to break down the image of the wild-eyed old woman sticking needles into a doll.

One of the most haunting stories in the book is "Fate" by Jenise Aminoff, in which a mother has a premonition that her son is about to die. To keep him with her a little longer, she invokes the power of a tricky spirit, which, of course, turns out to be not a very good idea.

The voices in "Mojo" are another real treat. A particular favorite of mine is Andy Duncan's "Daddy Mention and the Monday Skull." A wanderer relates the story of the legendary convict Daddy Mention who, after hearing a musical group formed by prisoners on the radio, tricks a malevolent swamp spirit into giving him singing abilities so he can get out of prison. He gets his wish, with one catch - his singing voice only works on Mondays, the same day the spirit may emerge from the swamp and exact its revenge.

For all its magical leanings, "Mojo" also has appeal to readers of mainstream fiction. Many of the stories tackle real-world issues, and there's also much humor to be found.

The only bad thing about this book is that it didn't include a story by Hopkinson herself. All in all, this is a collection with some powerful mojo.