Review: "Dragons of a Fallen Sun" by Margaret Weis and Tracy Hickman 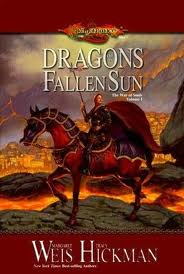 The Chaos war has been over for 40 years. The gods have abandoned Krynn. The old magic left with the gods, the new magic is fading. Great dragons hold most of Ansalon in their tyrannical grip. This is the state of Krynn when the kender Tasslehoff Burfoot, thought killed in the Chaos War, reappears using a time travel device that he was given by Fizban.

But something else has also arrived in the world of Krynn. A young healer named Mina, who quickly wins an army and leads it to battle in the name of the one God.

After a five-year absence, the originators of the Dragonlance series return to the world of Krynn. Can they breathe life into the shell of what's left of Dragonlance? That remains to be seen, but this book is a good start. My eye hadn't wandered toward the Dragonlance rack in years when "Dragons of Summer Flame" hit the shelves in 1995. That drew me back, but the fascination was short-lived. Then, in 1998, Margaret Weis' "The Soulforge," the first book of a new Raistlin trilogy, pulled me back in. This book manages to keep me interested enough to be looking forward to the next installment.

We lose another old friend in this book, but we gain some new ones. Despite the slightly contrived appearance of Tasslehoff, the rest of the book is intriguing. Mina and her mysterious God get my curiosity up, and Palin's fall from grace is also quite interesting. At times, he reminds me very much of his uncle.

The only problem I see with this book is the same thing that bugs me about Weis' Raistlin trilogy -- it could have used some tighter editing. We're assaulted by pages of backstory that isn't really necessary to enjoy the novel. Those who have read the previous novels already know this, and those that haven't don't really need it. More annoying than that are times like the one when we first arrive in Sanction. Weis and Hickman provide a detailed history of what has happened there in recent years. The facts the reader needed to know could have been given quicker and kept the story moving forward.

Despite these few bogs along the way, the book was more satisfying than I expected it to be. Who knows? Perhaps the return of Weis and Hickman is just what the Dragonlance world needs. I know I'll be watching with interest.