Review: "The Thief Who Spat in Luck's Good Eye," by Michael McClung 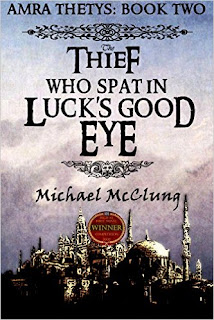 I read Michael McClung’s “The Thief Who Pulled on Trouble’s Braids” a month or so ago when it won the Self Published Fantasy Blog Off, and I absolutely loved it. I couldn’t wait to dig into the second volume, “The Thief Who Spat in Luck’s Good Eye.”

The second book is a bit of a different creature from the first as the stage and story get bigger.

Amra Thetys and Holgren, who we met in the first volume, make an odd couple. Holgren is a mage who dislikes the use of magic, and while Amra does seem to enjoy her work as a thief, she works by her own moral code.

When a giant reward is offered for anyone who can retrieve the secret of immortality from the ancient lost city of Thagoth, Holgren convinces the reluctant Amra to help him claim it, even though they're not really sure what they're looking for or where it is. If they can discover the location of the city, Holgren can open a gate to get them there well ahead of the other adventurers seeking the reward who will have to travel by more conventional means. They can claim the prize and be back before their competitors really get started.
Read more »
Posted by Fred Phillips at 2:19 PM 2 comments:
Labels: Amra Thetys, Book reviews, Fantasy, Magic, Michael McClung, Self-published, SPFBO, Thieves 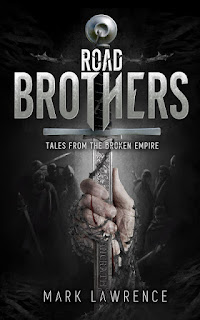 Just when you thought that Jorg Ancrath’s story had come to an end, Mark Lawrence delivers “Road Brothers: Tales from the Broken Empire” ($5, self-published).
This collection brings together 10 tales of Jorg and his road brothers, some of which have appeared elsewhere and some of which are new for this volume. Over the course of these stories, we get some further insight on Jorg’s character, as well as some of his companions that, perhaps, haven’t gotten as much ink.

If I had to choose a favorite from the stories, it would probably be “Bad Seed,” a tale of the former Alann Oak, who most Broken Empire fans will know better as Red Kent. The tale tells the story behind the nickname of the man who is, perhaps, Jorg’s most violent brother. More interestingly, though, it gives us a deeper look inside a man who is deeply conflicted about his nature.
Read more »
Posted by Fred Phillips at 10:47 AM No comments:
Labels: Book reviews, Broken Empire, Fantasy, Magic, Mark Lawrence, Post-Apocalyptic, Self-published, Short stories
Newer Posts Older Posts Home
Subscribe to: Posts (Atom)