"Episode III" marks the end of a long journey

To this day, I remember the first time I saw the words, "A long time ago, in a galaxy far, far away …" on the theater screen. It was 1977, and I was a 5-year-old, sitting in the old Rose Theatre in Bastrop, back when it was a movie theater. It may or may not have been the first movie I saw in the theater, but it was certainly the first movie that I remember seeing.

I was captivated by the Star Wars mythology. I had the books, the toys, everything I could talk my parents and grandparents into getting for me.

I remember a few years later when "The Empire Strikes Back" hit theaters. I was disappointed when my family arrived at the old Twin City Mall theater to find the line stretching back around the corner of Montgomery Ward. I didn't get to see the movie that day, but I did eventually get to see it when the line shortened.

I remember fondly my father grumbling about the cost when we saw "Return of the Jedi" at Twin City Mall. With popcorn, it cost about $25 for my mom, dad, myself and my brother to see the movie. By today's standards, that seems like one heck of a deal.

At the age of 32, "Star Wars" still has a hold on me. In my office at home, you'll find a light saber (a plastic one unfortunately, but a real one is still on my all-time wish list as soon as it's invented), a number of Star Wars action figures and a photo of me in full Darth Maul regalia during Halloween 1999. (That's not a rubber mask either; it's full makeup.)

I relived the wonder of the series in 1997 when I introduced my wife to the movies. Despite having been around me for quite a few years at that point, she had never seen the movies. It was almost as much fun watching her discover the secrets of the movies as it was watching them again myself. Her reaction even lessened my grumbling about the changes Lucas had made in the movies.

I look forward to that experience again in a few years with my son, and I hope he one day gets to see all six movies on the big screen. (And to answer your next question, yes I did like "The Phantom Menace" and "Attack of the Clones." Perhaps not as much as the others, but I did like them.)

Over the years, rumors have swirled about "Star Wars" possibly being a nine-movie series. Lucas has been adamant in saying he thinks "Star Wars" is the story of Anakin Skywalker/Darth Vader. It's now been fully told, so he insists he's done. But even he has hedged his bets a bit in recent interviews.

While I'd love to see a few more "Star Wars" movies in the future, I'm more than happy with the six I have. The closing chapter in the "Star Wars" saga arrives at an appropriate time for me, as a new chapter is opening in my own life. Here's looking forward to the next chapter. 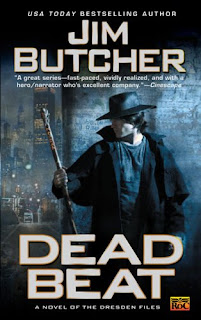 It's about time Harry Dresden appeared in hardcover.

"Dead Beat" ($23.95, Roc) is the seventh installment in Jim Butcher's series based on the wizard private eye, and the first in hardcover.

The book follows Butcher's hardcover debut late last year with "The Furies of Calderon" ($23.95, Ace), which introduced his high fantasy series "The Codex Alera." While that book was well-written and entertaining, it wasn't nearly as much fun as the Dresden books.

This time around, Harry finds himself in another pickle courtesy of the Black Court of the vampires - the old school, rotting flesh branch of the vampire world. Mavra, queen of the Black Court, has photos of Dresden and his partner, police detective Karrin Murphy, taking down a den of vamps (see the last Dresden book, "Blood Rites," for details). Since most of the world denies the existence of vampires, the release of those photos of a bloody, shotgun-wielding Murphy blowing away human-like creatures would mean pretty bad things for her.

Mavra presents the photos to Harry and says she'll release them unless he can bring her the "Word of Kemmler," a lost work by an evil necromancer. The problem for Harry - other than the power that Mavra could gain with the book, of course - is that several of Kemmler's disciples have arrived in town, also searching for the "Word." And there's an even bigger twist on the way for everyone's favorite wizard.

After seven books, most series start to get a little stale, but "Dead Beat" is just as much fun as the first installment of "The Dresden Files." The reason is that Butcher continues to find unique characters and twists that keep the story moving forward.

These books never pretend to be anything other than what they are, a fun adventure story loaded with magic and ghouls of all stripes. The action begins from the first page and doesn't let up for the next 387.

Butcher admits that what he calls the "swords and horses fantasy" of the "The Codex Alera" is his first love, and the second volume of that series is due out this summer. But here's hoping that he doesn't drop "The Dresden Files" any time soon. These books are far too much fun to be forgotten.