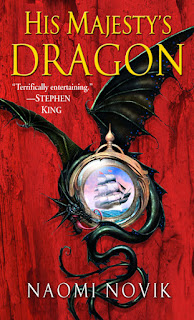 Having read fantasy for more than 20 years, I think I've seen dragons used in just about every way possible. But on rare occasion, I'll run into a book like Naomi Novik's "His Majesty's Dragon" ($7.50, Del Rey).

Originally published under the title "Temeraire" in the U.K., the alternate history begins aboard the ship of British Capt. Will Laurence during the Napoleonic Wars. When Laurence captures a French frigate, he's thrilled to discover a dragon egg in the hold. He's less thrilled to find it is near to hatching. Knowing the dragon's value to his country's Aerial Corps and knowing it must be bound early to be controlled, he and his officers draw straws to see which one will attempt to harness the dragon. But when the egg hatches, the beast ignores the man attempting to harness it and instead bonds with Laurence. Knowing his duty, he accepts that he will have to give up his proud and comfortable Navy life to become an aviator.

As the dragon, named Temeraire after a ship Laurence once admired, grows, the captain's reluctant sense of duty gives way to a deep affection for the dragon. The bond is strengthened when they discover that Temeraire is, in fact, a Chinese Imperial dragon, an extremely rare and intelligent breed and further through their experiences in training and action.

At heart, this is the story of a man and his dragon, and with Novik's considerable talents, if it were left at that it would probably still be worth a read. But here she gives us so much more, including a completely different view of fantasy's most popular creature.

"His Majesty's Dragon" reads a bit like one of Patrick O'Brian's naval adventures, except, of course, that it takes place hundreds of feet above the ground. Full crews scrambling around atop a moving dragon, cheating death with every move, provide for some truly awesome imagery.

Even more interesting is the personality that Novik injects into her dragons. Each beast is as distinctive and well-developed as her human characters, perhaps even moreso at times. It leaves the reader longing to meet more of them.

Though this is Novik's debut, it certainly doesn't read like one. In fact, "His Majesty's Dragon" is easily one of the best fantasies I've read in a long, long time. It's a must-read for both dragon-lovers and fans of historical adventure novels. 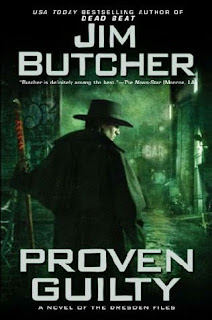 Since discovering Butcher's wizard-for-hire Harry Dresden with 2001's "Fool Moon," the tales of the modern-day magician have consistently entertained me more than any other writer in the past five years. His latest, "Proven Guilty" ($23.95, Roc), is no exception.

The secret war between the Red Court of vampires and the wizards' White Council is heating up, and Dresden, a newly named Warden, has been given a covert mission to find out why the Summer Court of the fey isn't aiding the wizards. But Harry's got bigger problems on his plate. He's fighting an inner battle against the fallen angel Lasciel, who is trying to tempt him to unleash her power. More pressing, he's just gotten a report of some big-time black magic going down in his hometown of Chicago.

When fans at a horror convention suddenly start becoming targets of the big-screen monsters they're celebrating, Harry is on the case. But when he discovers the source of that magic, it hits Harry close to home and may force him to further stretch his already strained relations with the White Council.

We're eight books into the Dresden Files now, and instead of running out of steam, the series seems to be getting stronger with each volume. With a two-hour Dresden Files pilot directed by Nicolas Cage set to air on the Sci-Fi Channel this summer, it's a safe bet we'll be seeing a lot more of Harry Dresden. That sounds like good news to me.

Review: "Traitor to the Blood" by Barb and J.C. Hendee 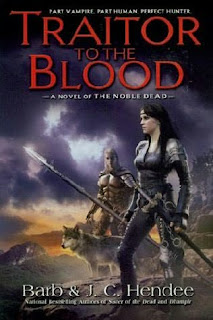 I've got several of the Noble Dead books by Barb and J.C. Hendee in the box of books I plan to read some day. They've always looked interesting to me, but I've always seemed to get them at a time where I was just tired of vampire books.

When the latest in the series, and their hardcover debut, "Traitor to the Blood" ($23.95, Roc) arrived, I decided it was time to give them a shot.

The story centers around vampire hunter Magiere, who is a dhampir or half-vampire, and half-elf Leesil, who spent his early years as a captive assassin to Lord Darmouth. Traveling with them is a scribe named Wynn and an odd dog named Chap, that is really one of the fey. They're being tracked by Chane, a vampire that Magiere thinks she's killed, and Welstiel, who resurrected Chane and hopes to use Magiere to help him overcome his need for blood.

They arrive in Venjetz, Darmouth's city, to help Leesil come to grips with his past and discover what happened to his parents when he fled Darmouth's service. Through Welstiel's manipulations, Magiere finds herself in service to Darmouth as a vampire hunter, while Leesil has connected with a friend of his parents, Byrd, an innkeeper working with a resistance movement seeking to assassinate Darmouth and free the people. Of course, in the Warlands, things are not quite that simple.

I'm picking the story up in the fourth book of the series, and to be honest, I did feel at times that I'd understand the story a little better if I had been familiar with the first three books. On the other hand, the authors do a fine job of filling in the necessary details to make sure that readers picking the book up for the first time aren't lost and can enjoy the story.

Based on comments I've read, the previous three books offered a lot of action and battle with vampires, but this story is more of a fantasy in which one of the main characters just happens to be half-vampire. It deals much more with political maneuverings and intrigue than with stakings and beheadings, and there are some nice twists and turns to the story.

"Traitor to the Blood" holds appeal for both the fantasy fan and the vampire novel fan, whether or not you've been introduced to the characters before. It's a solid, enjoyable novel, and I'll be digging the past books in the series out and moving them to the top of the to-be-read stack.