Occasionally I get a message from someone who would like me to review their book. I welcome those inquiries and submissions for review. If you'd like to offer your work up for review, drop me an e-mail with a little info, and if I'm interested, I'll let you know where to send your submission. That said, I do have a few ground rules that I want to let people know up front.

I accept very few books for review here. The reason is just a lack of time to read and review all of them. I currently get about 8 or 10 books a week for review through other outlets, and I can only get to a fraction of those. On the other hand, I'm always looking for new and exciting stories, so if you think you've got something I'd like, I encourage you to let me know about it. I do welcome small press and self-published works. However, I do not accept books that have been published through PublishAmerica, Author House or one of those other companies that accept everything they get. It's not a judgment on your individual work. It's that I have had tons of absolutely awful books from those "publishers" foisted upon me, and I simply won't bother with them anymore. I will also accept ebooks in the epub format, which I can read on my Nook.

While I enjoy exceptionally well-written books, technical skills matter less to me than a good story. An adequately-written work with an incredible story will beat a beautifully written piece with a lousy story for me every time. That said, a book littered with grammatical and punctuation errors is not a good idea. I work as an editor, and they do tend to annoy me. My primary interests are fantasy and horror, and I like just about all varieties of those genres. I do review some science fiction, but it usually needs to have some sort of interesting twist to catch my attention. I also like good humor. I will consider other genres, but it will likely be a tough sell.

If this all sounds a little picky, well, it probably is, and I apologize for that. My pickiness protects us both. I don't need a house full of stuff that I'm not going to review, and you don't need to waste the materials and postage to get it to me if I can't review it or am not interested. If you're unsure whether your book is right for this site, it never hurts to drop me an e-mail and find out.
Posted by Fred Phillips at 2:01 AM No comments:
Labels: Submission guidelines

I just had one of those things that Jon Stewart likes to refer to as a "Moment of Zen," that I had to share.

I was sitting at a red light behind a Nissan Sentra with this monstrous bumper sticker plastered across a whole half of the bumper demanding that I "BUY AMERICAN." Priceless. I wish that I'd had a camera.
Posted by Fred Phillips at 4:17 PM No comments:
Labels: Random rants 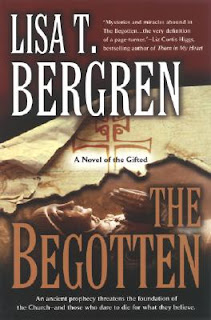 Here’s the setup: Fragments of what could be a lost letter of Paul the Apostle foretell the coming of a group called the Gifted, blessed with special powers to battle evil, in this case a being known as the Sorcerer, who is a pretty vicious character. Naturally, such a group would be as much a threat to the church of 14th century Italy as it would be to evil, so they have enemies on both fronts.

The setup sounds intriguing. The delivery, not so much. For one thing, “The Begotten” spends a lot of time setting up, bringing the Gifted together, and while I suppose it’s necessary, after a strong start to the book, I really started to nod off toward the middle.

For fans of historical fiction or Christian fiction, who revel in attention to historical detail and reaffirmation of their faith, “The Begotten” might be a pretty good book – judging from the reviews on Amazon, it’s popular with that crowd. For me, coming from a fantasy background, there seemed to be a lot of information here that bogged down the story I was interested in, that ultimate battle between good and evil. I also detest preachiness, and the story does occasionally veer into preachy territory.

I can’t say it’s a bad book. It’s well-written and there are some quite enjoyable moments scattered throughout, but overall, it’s just not for a heathen like me. Fans of Christian and historical fiction may enjoy it, though.