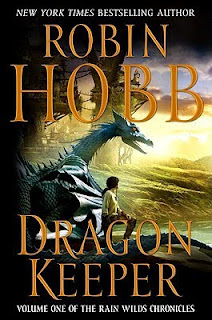 In the mid-1990s, I was enchanted by Robin Hobb’s Farseer trilogy, which told the tale of FitzChivalry Farseer’s rise from illegitimate son of a noble to master assassin. I also enjoyed her return to that tale in the Tawny Man trilogy. For some reason, though, I was never able to get into the Liveship Traders books, which span the years between those tales in another part of the same world. So I was a little surprised to find myself caught up in her latest tale, “Dragon Keeper” (Eos, $26.99).

The story is much more closely related to the Liveship books than Fitz’s tale, but I still found it fascinating. It begins with great sea serpents, led by the dragon Tintaglia, making their way upriver into the Rain Wilds, where they will cocoon to become dragons themselves. But these serpents should have cocooned years earlier and have spent too much time in the sea. The landscape of the Rain Wilds has also changed since the last group of serpents made their way there to cocoon. The terrain is much more treacherous and the river has turned acidic. The dragons that hatch from the cocoons are too early and mostly malformed, not the great beasts of old.

In the meantime, Tintaglia discovers another living dragon to take as a mate and disappears, leaving the Rain Wilders to care for the fledgling dragons. They soon find their resources depleted, and resentment builds between the people and the dragons. The solution lies in the lost city of Kelsingra, a place in the dragons’ ancestral memory where they lived in harmony with the Elderlings. The Rain Wilders have assembled a collection of misfits, marked by the harsh environment with scales, claws and other deformities, to accompany the dragons and care for them on their journey. Among them, a young girl named Thymara, who, because of her deformities was supposed to have been left to die at birth, but was saved by her father. She joins the expedition because she longs to do something to prove her value and escape her life as an outcast.

Meanwhile, Alise Finbok, the convenience wife of a Bingtown trader who cares little for her, has used a clause in their marriage agreement to push her unloving and often cruel husband to finance an expedition to the Rain Wilds to study the dragons. When she gets there, she finds herself caught up in the middle of the dragons’ journey and the quest for Kelsingra, much to the dismay of her travel companion Sedric, who is keeping his own secrets.

I’ve always been a sucker for a good dragon story, and in “Dragon Keeper,” Hobb offers a view of the beasts that we’ve rarely seen. Dragons, typically, are depicted as magnificent and highly intelligent creatures (which, indeed, the fully-formed Tintaglia is), or as petty tyrants. The fledgling dragons here are given a certain human quality, though. They’re not perfect. They’re not what they were meant to be, and most of them are not sure exactly what that is. They have ancestral memories of soaring in the clouds, but all are bound to the ground due to their ill-formed wings. They are, at times, pathetic, yet they still maintain just a bit of the mystical grandeur of their race, which will bloom as the story goes on. While there are many flashes of their proud and arrogant kind, they also have hopes, fears and dreams, and are, on the whole, a bit more fragile and relatable than your average dragon.

The book requires a certain amount of patience in the early going, It starts somewhat slow, as it must, to introduce the various characters and give the reader a full understanding of them and to explain the process by which the sea serpents have traditionally migrated and cocooned to become dragons. Early on, both the humans and the dragons are much less interesting than they become. But by the time that Alise arrives in the Rain Wilds and the dragons begin their hunt for Kelsingra, I became entranced with the story and unable to put it down. It bodes well for the second half of the tale, “Dragon Haven,” due out in May. The background is out of the way now and hopefully we can jump right into the story at full stride.

Review: "How to Train Your Dragon" by Cressida Cowell 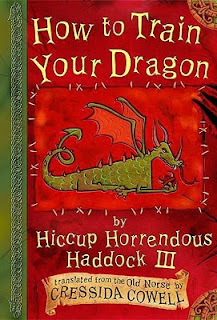 After enjoying the Dreamworks movie “How to Train Your Dragon” on a rare family outing recently, my son demanded that we add the book to our bedtime reading ritual. As we were just about to finish “The Hobbit” and looking for a new book I picked up Cressida Cowell’s novel and the sequel “How to be a Pirate.”

Just a word of warning to those who enjoyed the movie and are considering picking up the book or vice versa: They are nothing alike. Outside of the setting and names, there are very few similarities. Having watched quite a few Hollywood versions of books I love in the past, it wasn’t surprising to me that there were changes, but the story featured in the movie is unrecognizable compared to the book.

Initially, my son and I were a little disappointed to find out that the Toothless of the book was a very small Common or Garden dragon that was, well, actually toothless, as opposed to the powerful Night Fury of the movie. In fact, most of the dragons of the book are small with some of the largest being described by Cowell as “about the size of a Labrador retriever.”

Perhaps the biggest difference, though, is that the Vikings of Cowell’s book are not terrorized by the dragons and don’t seek to kill them as in the movie. Instead, for the Vikings of the book, the dragons are utility animals. They catch them and train them to hunt and fish, usually by yelling – loudly. In fact, there’s quite a bit of yelling throughout the book. So instead of training to kill dragons, our hero Hiccup Horrendous Haddock III and other boys of his age must sneak into the cave where thousands of young dragons are hibernating, choose their dragon and bring it out in a basket. Then, on the festival of Thor’sday Thursday, they must demonstrate to the members of the Hairy Hooligan Tribe that they have a mastery over their animal. Anyone who cannot capture a dragon or train it will be exiled from the tribe.

I won’t go any further than that in describing the plot of the book because I don’t want to give too much away, but suffice it to say, if you’ve seen the movie, you don’t know what’s coming.

Unlike the movie, the print version of “How to Train Your Dragon” is very much a book for boys. The heroine of the movie, Astrid, doesn’t exist in the book, nor do any of the other girls involved in the dragon training. Instead you have boys with names like Snotface Snotlout, Fishlegs and Dogsbreath the Duhbrain. There are also quite a few jokes about snot, farts and other things that young boys will find amusing, though they’re all fairly innocent and never get too crude.

On a style note, I was a bit annoyed at the random capitalization in the book, and when the adult Vikings are yelling, the text often appears as ALLCAPSRUNTOGETHERWITHNOSPACES, which adds a level of difficulty to reading the book out loud. On the bright side, I enjoyed Cowell's flair for alliteration.

In the end, my son and I found Cowell’s novel entertaining, if not quite what we expected, and enjoyed the original take on the story. It’s a fun story and an easy read, perfect for bedtime reading, and we’re looking forward to starting on the sequel.

It’s really hard to compare the book to the movie as they’re pretty much two completely different entities. Both are enjoyable, though I think this might be that very rare case where, as much as I liked the book, I believe I enjoyed the movie version more. Sorry, Ms. Cowell.