Review: "Harry Potter and the Goblet of Fire" by J.K. Rowling 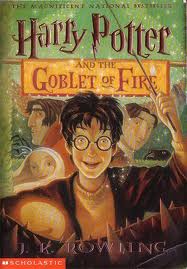 After an eventful trip to the Quidditch World Cup, Harry and his friends return to Hogwarts for their fourth year. When they arrive they're disappointed to hear that the schools annual Quidditch tournament won't be held this year -- until they find out there's something more exciting on the way. For the first time in over a century, the two other magic schools will come to Hogwarts for the Tri-Wizard Tournament. But when Harry's name somehow comes out of the Goblet of Fire as a fourth champion, things take an interesting turn.

Never in my life have I pre-ordered a book -- until this one. Having read the first three in a frenzy, I eagerly anticipated this fourth book. While I wasn't disappointed, this is certainly not the best of the four either.

At 734 pages, this is a hefty book -- especially when you consider its intended audience. And it had all the earmarks of a rushed production schedule. It was riddled with minor errors that should have been caught. Most people can overlook those, but they just take me out of it. The book could have also used some tighter editing.

The biggest disappointment for me, though, was the death of a key character (I won't spoil it for anyone who hasn't read it.) For a writer who has excelled at getting me emotionally involved in the previous three books, she didn't put much impact into the death of this character. It was more like "oh, he died, let's move along."

Don't get the wrong idea, though. While I do have some nitpicks with this book, I still enjoyed it. Even though I'm a journalist myself, I thought the corrupt journalist Rita Skeeter was a nice touch, and it makes a point that we of that profession should keep in mind. Rowling broadened the scope of her world by introducing a pair of rival wizarding schools that bring a great number of possibilities to future books. She also left a little tension at the end. With Voldemort back in the world, Harry is still dangling in the line of danger.

Don't let the fact that this one is not quite as good as the first three steer you away from it. This volume moves at a more leisurely pace, but if you liked the first three, you'll probably enjoy it. Let's just hope Rowling and her publishers take a little more time with the fifth volume.