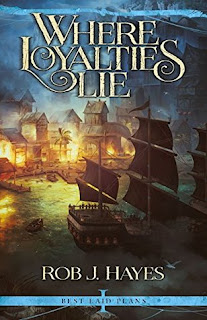 I start my dive into the most recent Self Published Fantasy Blog Off finalists with the book currently sitting in the lead by a slim margin, Rob J. Hayes’ “Where Loyalties Lie.”

Keelin Stillwater is not your typical pirate captain. Drawn into the lifestyle by swashbuckling tales, he’s found it quite different than he expected, but he’s risen through the ranks due to his own cunning and commitment. He prefers to avoid bloodshed when possible, which doesn’t always sit well with his crew, and he has his own agenda in the pirate trade.

His relationship with his sometimes lover Elaina Black is even more complicated than the one with his crew. For one thing, his ship, The Phoenix, was stolen from her, which her father, the bloodthirsty and cruel captain Tanner Black, views as an offense that can only be answered with Keelin’s death.

Then there’s Drake Morass, a legendary rogue and sworn enemy of the Blacks, who has designs on setting himself up as the king of the pirates, but he needs Keelin’s help to do it.