Review: "The Swords of Night and Day" by David Gemmell 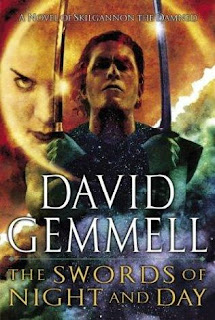 With "The Swords of Night and Day" ($24.95, Del Rey), David Gemmell returns to the story of a fan favorite, but with a twist.

It's been a thousand years since the death of the legendary swordsman Skilgannon the Damned when he wakes up in a strange room and a strange body. It's his own body, but without the familiar aches and pains of age and old wounds he remembers. It's a young, fit body - that of the swordsman in his prime.

Skilgannon soon finds out why he's here when he meets Landis Khan, the man that used a combination of technology and magic to create a new body from bones found in Skilgannon's tomb and bring his soul back from where it was lost in the Void, the in-between world. Now he expects the swordsman to take up the cursed Swords of Night and Day that he laid aside more than a millienium ago and fulfill an ancient prophecy of the priestess Ustarte by bringing an end to the tyrannical reign of the Eternal.

But there are more surprises waiting for Skilgannon. He's not the only reborn in the picture. Though they lack the souls of the original heroes, there are duplicates of several legendary figures roaming the landscape, including a direct descendent of Skilgannon, with just as much skill and a lot less sanity. But the biggest blow of all comes in the identity of the Eternal herself - Skilgannon's greatest love and worst enemy.

Unlike a lot of fantasy writers who deal in series, Gemmell knows how to do it right. Even when he returns to familiar characters, there's always a twist, and in this book, it's a big one.

Not only does the story put Skilgannon in a new light, it puts the entire world of the Drenai in a new light. As expected from Gemmell, "The Swords of Night and Day" is a rousing adventure story with plenty of action and swordplay. But this book has a more subtle subplot that puts a science fiction spin on the story.

While the main story is fun, readers will find themselves wondering about other elements of the story and the ancient past of the Drenai world. The technology represented in recreating people from bones will sound eerily familiar to recent headlines on cloning. Portions of the prophecy regarding the golden shield and the silver eagle that travels the stars and communicates with the magicians will also hit home.

Though I've been a fan of the Drenai series from the beginning, this book is the first time I've thought about that world in these terms. The possibilities are almost more interesting than the story, which is quite good in its own right.

If you haven't read Gemmell before, now is the time to give him a shot. You're missing out on one of the best fantasists in the business.

Review: "Time of the Twins" by Margaret Weis and Tracy Hickman; "Homeland" by R.A. Salvatore 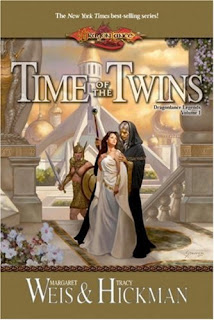 It's always nice to take a walk down memory lane, and I got that opportunity thanks to a couple of recent releases of hardcover editions of some of my favorite books from junior high and high school.

If you had asked me when "Time of the Twins" came out, Weis and Hickman would have ranked just below Edgar Allan Poe and J.R.R. Tolkien on my list of favorites. While that's no longer the case, the main character in the book, the wizard Raistlin Majere, still ranks as one of my favorites.

This second Dragonlance trilogy, "Legends," offered a much darker tale than the original "Chronicles" trilogy. Raistlin, now a black-robed mage, has taken over the cursed Tower of High Sorcery in Palanthas. He's grown more and more powerful and slipped farther into darkness. Raistlin has hatched a plan to enter the Abyss and challenge the gods themselves.

The only person that can stop him is his loyal brother Caramon, who he's tossed aside. To ease the pain of his twin's scorn, the once-proud warrior has retreated into the bottle and become fat and lazy. Caramon combines his efforts with the seemingly ever-present kender Tasslehoff to try to reign in his brother's lust for power.

In "Homeland," readers first learn the origins of Salvatore's drow hero Drizzt Do'Urden. "Homeland" delves into the twisted society of the drow by showing Drizzt in the drow home city of Menzoberranzan. Sickened by the cruelty of his kinsmen, Drizzt rebels against the matron mother of House Do'Urden, and will, in the next two books of the series, make his way alone through the caverns of the Underdark and eventually to the surface world.

"Time of the Twins" and "Homeland" have more than a few things in common. They're both the opening book of a second series about familiar heroes, and they're both much better than the original tales of those heroes. The reason is that they break with the normal D&D storyline, where a ragtag group of "unlikely heroes" are thrown together in a quest for some object of power to save the world. Reading Weis and Hickman's "Chronicles" trilogy and Salvatore's "Icewind Dale" trilogy is fun, but you can almost hear the dice clicking in the background in those stories.

These books - particularly "Homeland" - focus more on the individual and take a deeper look at the inner workings of their characters. These stories are more about the people than the quest.

Besides that, they look very good on your bookshelf, if you're a fan. The new packaging for "Homeland" is gorgeous, but I do have a few quibbles with the artwork for "Time of the Twins." I loved the original Larry Elmore artwork for this book - in fact, it's one of my favorite book covers ever. Wizards of the Coast opted to go with newer artwork by Matthew Stawicki, which appeared on the recent paperback editions. It's nice work, but I would have preferred the original art. I guess it's because I grew up looking at the Elmore cover.

Still, this package, which matches Weis and Hickman's recent "War of Souls" trilogy and the hardcover re-releases of the "Chronicles" trilogy, is still a worthy addition to my library.

While my days of living in the D&D worlds are long past, I still enjoy an occasional visit, and these classic tales from those worlds fit the bill perfectly.