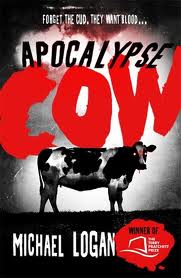 While I enjoyed the book, I find myself a little disappointed with Michael Logan’s magnificently titled “Apocalypse Cow” (Doubleday).

Maybe my expectations were too high, but as the winner of an award named after Terry Pratchett and a quote saying that it made him snort with laughter, I expected something funnier.

“Apocalypse Cow” offers a different take on the zombie apocalypse. It throws together abattoir worker Terry Borders, bumbling journalist Lesley McBrien and teenager Geldof Peters. All of the characters bring their own baggage. Terry has some stress issues with his job and believes that his bad luck with women comes from a stench of death that hangs around him from his work. Geldof is the son of a domineering and off-kilter activist who has forced him to follow her lifestyle. Lesley is the daughter of a famous, award-winning journalist, but so far her career has been empty.