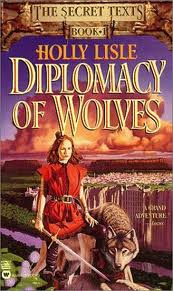 It's been a while since I checked in with Holly Lisle, but she seems to be doing well. She's got a new world, a new publisher, a new series and even a slightly new approach.

The world is Matrin, and it has been ravaged by sorcery. Magic is now punishable by a gruesome death, but it still thrives in secret. In the depths of their massive keeps, royal families keep bands of Wolves -- magic-users constantly working to improve their house's power and standing.

Kait Galweigh is a diplomat who uncovers a plot against her house, but is unable to stop it. Now, she's on the run and hiding a secret. She possesses a power that means her death if it's discovered, and the time is coming when she must use that power.

I must say, this is probably Lisle's best book to date. It begins as a story of court intrigue and transforms into high adventure. More importantly, it's fun all the way through.

The world of Matrin is well-developed and a little different from the typical fantasy world, featuring some advances not seen in the typical medieval setting. The magic itself is also quite fascinating. The practitioners of the art endure horrific transformations in exchange for the power they wield.

Anyone who is a fan of Lisle's previous works, can certainly see the transformation in her writing. "Diplomacy of Wolves" is more tightly plotted and well-planned than any of her previous works. It's fast-paced, but with a bit of substance as well.

The downside? She falls into one of the biggest traps of fantasy. Lisle interests the reader in the characters and gets him engrossed in the story, then resolves absolutely nothing in the end. The reader is left hanging, and for me, that ruined an otherwise pleasurable read. I maintain that, even in a series, every book should have a conclusion that at least partially satisfies the reader. Had she done that, this would have been an outstanding offering.

It's still a good read and a very solid opening to the series. I highly recommend it -- but I wouldn't start reading it until the others are out.