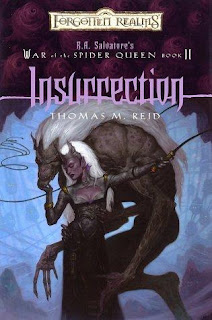 A few months ago Wizards of the Coast launched an ambitious six-book project called "R.A. Salvatore's War of the Spider Queen" to shake up one of the Forgotten Realms world's most feared races. Now, the story continues with Thomas Reid's "Insurrection" ($24.95, Wizards of the Coast.)

A party from the drow city of Menzoberranzan, which includes high priestess Quenthel Baenre and master wizard Pharaun Mizzrym, has arrived in the neighboring dark elven city of Ched Nasad. The group is looking for answers as to why their goddess, the Spider Queen Lolth, has forsaken them.

They discover that Lolth's absence is universal. Not only has she abandoned the drow of Menzoberranzan and Ched Nasad, but she's also abandoned other races that worship her.

Unfortunately for the drow, the other races that live among them - those they consider the "lesser races" - have also discovered their weakness. But even facing the possibility of rebellion in their cities, the Matron Mothers of Ched Nasad continue their scheming and machinations against each other, further weakening the dark elves' position.

One of the concerns I had going into this series was how it would flow from one book to the next. The advantage to having a different author write each book is that readers can get the series in their hands much more quickly. The disadvantage is that there could be continuity problems.

The first transition, at least, has gone smoothly. While Reid's style differs from that of Richard Lee Byars, who wrote the first novel "Dissolution," the flow of the story is much the same. The two writers seem to have a singular vision of the characters and events, and most readers will hardly notice the difference.

"Insurrection" does its job well as a building block. The story is entertaining on its own, but its real purpose is to add layers to the larger story which takes place over a six-book span. It's a book that adds new questions and answers very few, but that's as it should be.

My only complaint with the book is a relatively small issue. To me, "Insurrection" sometimes doesn't divorce itself enough from the game - especially in regards to magic. Often when Pharaun discusses his magical limitations, the passages read like they came straight from the Dungeons and Dragons manual. The hardcore gamers who want the novels to strictly adhere to the rules will like it. But it may be jarring to those like me, who are looking for a good story that complements a world they've played in, rather than something that sounds like a translation of a gaming session.

For readers unfamiliar with the Forgotten Realms world and drow society, this book isn't the best place to start. It plops the reader down right in the middle of the action and some understanding of how things operate and what has happened before is needed. But for those following the story, it builds nicely toward what could be a very interesting larger story.

Review: "Guitar: A Complete Guide for the Player" by Dave Hunter

Why couldn't I have found a book like this 12 or 14 years ago?
"Guitar: A Complete Guide for the Player" by Dave Hunter ($29.95, Thunder Bay Press) is a must-have book for any beginning guitarist. The publisher bills it as the most comprehensive manual for the guitar player ever produced. That may be a bit of a stretch, but the book comes pretty close.

Aside from the information, it's a gorgeous, oversized book with plenty of color illustrations. But the true strength of the book is its content.

"Guitar: A Complete Guide for the Player" opens with a brief history of acoustic and electric guitars, featuring photos of some of the most popular guitars like the Gibson Les Paul and the Fender Stratocaster, as well as a few oddballs, like the Martin Backpacker, the Burns Bison and the Parker Fly.

From there, it goes through some subjects that a lot of other guitar manuals ignore. One chapter in the book covers basic maintenance of guitars and amplifiers. With detailed illustrations, this chapter describes how to set the bridge of a guitar, change pickups, even fix that annoying short in the pickup selector switch. If you're a guitar player, you know the one I'm talking about.

Another chapter takes a look at effects pedals. It explains the majority of effects available and offers schemes to help you get the best out of your stomp boxes and rack systems.

Only after it has offered a wealth of practical information on choosing and caring for your guitar, does it get to playing. As you'd expect, more than three quarters of the book is devoted to playing. It features lessons and background on a wide variety of guitar styles from classical to country to heavy metal.

The lessons are fairly comprehensive, covering ideas about the styles from theory to rhythm to lead. These are accompanied by chord illustrations and examples in tablature. Most of the examples are based on the works of specific players and are fairly basic so even beginners can pick them up.

About the only thing that could have made this book better would have been an accompanying tape or CD to let readers hear what the lessons should sound like when played properly.

If you're a beginning guitar player, this book will provide you with a solid foundation to build on. If you've been playing for 20 years, it might not be as helpful - but you never know where you can pick up a new trick.