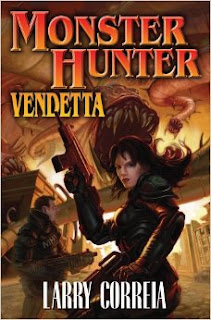 After facing down the end of the world at the hands of some Lovecraftian aliens, Owen Pitt has settled into a more normal life in Larry Correia’s “Monster Hunter Vendetta” ($7.99, Baen).

That is, if a guy that makes his living killing monsters that most of the world doesn’t think exist can have a normal life.

He’s engaged to monster-hunting partner Julie Shackleford and making a lot of money for Monster Hunter International doing what he does best. He thinks the threat of the Old Ones is behind him, until an assignment in Mexico goes sideways.

While resting after a successful hunt, Owen is attacked in his hotel room by a seemingly unbeatable necromancer. When he escapes, the wizard sends hordes of zombies at the hotel, resulting in an ugly incident and Owen’s arrest.

He soon discovers that the necromancer is working for the Old Ones, and that he has a connection to MHI. Owen must figure out who he is and how to stop him before he brings eternal darkness to the world.

Random Rants: Where does your suspension of disbelief end? 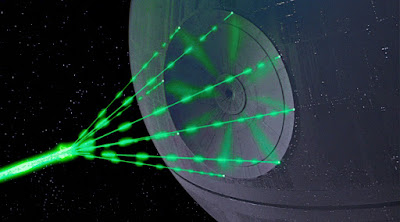 As fantasy, science fiction and horror fans, our realities, perhaps, stretch a little farther than the average earthling. I know people who are unable to watch most science fiction movies because they innately pick them apart and drive the people around them crazy. One of those people, oddly, is also a huge "Doctor Who" fan, who has no problem with an immortal time traveler using his time machine to drag the Earth through space, so go figure.

Anyway, most of us who hold the speculative genres dear have accepted that there are some things we just have to accept in order to enjoy our chosen genres. If you spend all of your time picking apart what's not possible or whether or not the science the author/screenwriter used is sound, that doesn't leave you time to get lost in the story.
Read more »
Posted by Fred Phillips at 2:47 PM No comments:
Labels: Doctor Who, Dragons, Magic, Random rants, Star Wars 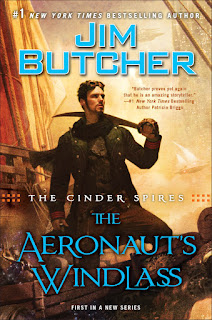 With “The Aeronaut’s Windlass” ($27.95, Roc) Jim Butcher introduces us to a very different world from the ones he’s worked in before.

In this world, people no longer live on the surface because it’s too dangerous. Instead they live in spires, which rise high above those dangers. Travel and trade between the spires is done in airships powered by lift crystals. One of those belongs to Captain Francis Madison Grimm, a disgraced naval officer of Spire Albion turned privateer. Grimm starts the story a bit down on his luck with a busted ship and limited ways to repair it.

Bridget Tagwynn is the last heir of a once-mighty family that has now fallen into obscurity. When she joins the Spire Guard for a year of mandatory service required for children of the aristocracy (along with her cat protector Rowl), she runs afoul of a son of a powerful family, and finds a pair of unlikely allies in Gwendolyn Lancaster and her warrior-born brother Benedict Sorrelin Lancaster, children of one of the spire’s strongest families.
Read more »
Posted by Fred Phillips at 11:07 AM No comments:
Labels: Book reviews, Fantasy, Jim Butcher, Magic, Steampunk, The Cinder Spires

Review: "The Walking Dead: Compendium One" 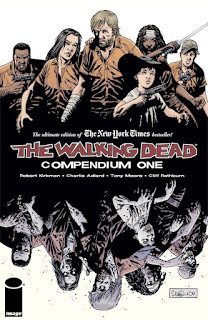 I received “The Walking Dead: Compendium One” as a Christmas gift, and mowed through it thanks to an unfortunate cold that kept me laid up during the New Year holiday weekend.

It was a very interesting experience for me, backwards from the usual. In most cases, I’m very familiar with the source material before I go into TV and movie adaptations. This time, I had about five seasons of the TV show under my belt without having read the comics.

SPOILER ALERT: Before I go any further, I’ll tell you that if you haven’t read the comics or watched the first few seasons of the show and plan to, you may want to stop here. I’ll be discussing the similarities and divergences between the two, and you may learn some things you don’t want to know.

Now that’s out of the way, I’ll start by saying that I was a little surprised at how very different the two are. Though they follow the same basic story arc, so much has been changed. I wondered constantly while reading this whether I would have the same appreciation for the show if I had read it before or if I would have been angry about some of the changes.
Read more »
Posted by Fred Phillips at 1:47 PM No comments:
Labels: Book reviews, Comics, Horror, Robert Kirkman, The Walking Dead, Zombies 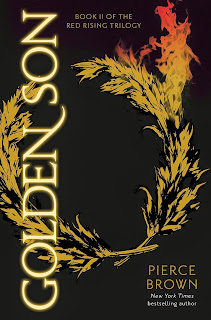 So another year has come and gone, along with a number of books -- not as many as I wanted, of course, but that's always the case. I'll start 2016 by looking back at some of my favorite reads of 2015.

As always, I'll remind you that this is, by no means, a "best of" list, just a collection of my favorite things that I read. Some of these books were released in 2015, some are older, and I certainly didn't read enough books this year to remotely qualify as an expert on everything released.

The first three entries are my favorite picks of the year, the ones that I would most recommend if asked. Beyond that, the order is random -- pretty much reverse chronological of when I read them.

"Golden Son," by Pierce Brown. When I reviewed this second volume in Brown's Red Rising Trilogy back on January 8, I asked if it was too early to call book of the year. Apparently it wasn't. Though I found some fantastic reads later in the year (the next two on this list, in particular), nothing rose above Brown's continuing gripping account of a low-born miner who has, through deceit and the aid of a group called the Sons of Ares, risen to a position of power where he may be able to take down an oppressive galactic caste system. The finale of the series is, far and away, my most anticipated book of 2016.