Review: "The Lies of Locke Lamora" by Scott Lynch 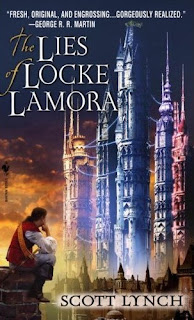 I strive to never judge a book by its cover, but sometimes a good cover helps. Take Scott Lynch's "The Lies of Locke Lamora" ($6.99, Bantam Spectra). It first landed on my desk in hardcover last year with an artsy deep purple and gray cover, and I thought it sounded interesting, but never got around to picking it up.

The paperback version, with a much more interesting cover, arrived a couple of weeks ago, and reminded me that the book had interested me originally. I picked it up this time, and was very sorry that I hadn't read it a year ago. It is, perhaps, one of the best debut novels that I've ever read.

Locke Lamora is an orphan in the city of Camorr who escapes slavery following a plague outbreak by sneaking into a group of children purchased by a gang leader known as the Thiefmaker. Locke turns out to be a little more than bargained for, and as a last resort, the Thiefmaker sells him to Father Chains, the supposedly eyeless priest of Perelandro.

Under Chains' tutelage, Locke grows up to be the leader of his own gang of thieves, quietly and happily breaking the doctrine known as the Secret Peace between the thieves and the nobility and taking the upper class of Camorr for thousands. But Locke's happy existence is about to be turned upside down.

Part "Oliver Twist," part swashbuckling fantasy and part caper, the first half of this book is amazing fun. The roguish Locke and his band of merry men (yes, there's some Robin Hood in there as well) are charming to spend time with and will amaze with their ability to pull off complex heists. Then, around the midpoint of the book, Lynch delivers a hard punch in the gut, and the book becomes much darker and much more personal. The final 300 pages are almost like a different book than the first 400, and both are powerful stories in different ways.

Lynch also takes chances in the delivery of the story, relying on trips to the past to flesh out the action in the present. That could be a fatal flaw, but the author handles it deftly, making the flashbacks as immediate as the current action and always relevant to what's going on. They serve the dual purpose of offering insight on Locke's past as well as clues to his current actions.

Another impressive point of this book is the world that Lynch has created. While it would have worked in the standard medieval fantasy milieu, Lynch has built a well-developed world for Locke Lamora that is part Venice, part alien landscape and holds plenty of mysteries to be explored.

And, if you still need one more reason to read this book now, consider one of the best gang names ever - the Gentleman Bastards.