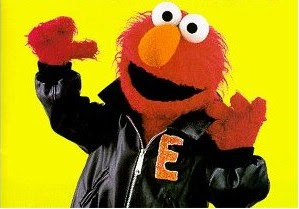 I was a bit taken aback earlier this week when I sat down to watch an episode of "Sesame Street" with my son. Instead of the familiar theme song, suddenly this hip-hop beat thing was coming out of my television. I looked to my son, who was staring at me with this bemused look on his face as if he suspected I had secretly replaced his real "Sesame Street" with a new version to see if he noticed. He was trying to sing along with the theme song, as he often does, but having a little trouble, looking confused, as if to say "what happened to Sesame Street song?"
Now, I'm not against updating things, and yes, they did keep the basic vocal melody from the favorite. I just have to ask why they felt it necessary. Lest you think I'm picking on it because it's hip-hop, which I'll readily admit that I just don't care for, let me say that I don't particularly want to hear a country or metal version of the song either. The song has been just fine for almost 40 years with only minor modifications.
Here's what I figure happened: some marketing geniuses were sitting around a table (probably one or two of the guys that came up with these ad ideas), and one of them says, "We've been the most popular kids' show on television since most people can remember. We've really got to change something. You know what the kids like today? That hip-hop thing. We ought to turn the theme song into a rap tune. That would really get the kiddies to watch." Leave it to marketing guys to say, "Hey, we've got a good thing going here, let's mess around with it?"
The fact of the matter is, there are just some things you don't mess with. You wouldn't make Big Bird red or Oscar happy. It just wouldn't work. So why change a theme song that millions of kids have sung along with every morning since 1969? It doesn't make sense.
Look at the numbers. It's estimated that 75 million Americans watched the show as children, and Nielsen Media Research shows that 99 percent of American preschoolers recognize the characters, 81 percent of kids under the age of 6 own a Sesame Street toy or game and 87 percent own a Sesame Street book.
The show doesn't need street cred. It's already got plenty.
Posted by Fred Phillips at 10:30 PM
Labels: Random rants