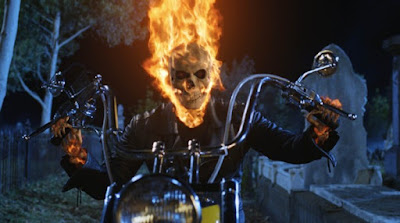 I'm a lifelong comic book geek. After years of horrible adaptations of comics for TV and movies, I was thrilled in the late 1990s when the technology finally caught up to allow Hollywood to make good big screen versions of my favorite comics. When it comes to the resulting glut of comic movies, I've seen them all, from the very good ("Batman Begins," the X-Men franchise) to the downright horrid ("The Hulk," "Elektra") and a whole bunch that fall somewhere in between.

For the most part, I've never really been drawn to the Spider-Mans and Supermans of the comic world. I've always preferred the darker characters, the ones that, at times, make you wonder which side they're really on -- guys like Wolverine, The Punisher and, of course, Ghost Rider.

I was actually quite interested to see how they would handle Ghost Rider in a live action movie, and after seeing the film, I now understand there are some things that are probably best left in the comic books. My first problem with the movie is in casting. Nicolas Cage is just a little too old to play Johnny Blaze. They dyed his hair black to make him look a little younger, but in truth, it just made him look like a guy in his mid-40s with his hair dyed black. I could live with Cage because at least I know he has respect for the comic, but I just didn't buy Wes Bentley's turn as Blackheart at all. I have a hard time picturing the son of Mephistopheles as the clean-cut John Stamos look-alike that Bentley played him as. He either needed to be a little more refined and sophisticated or a little more, well, black-hearted and evil. As it was, I kept expecting the young Olsen twins to show up to ask him a question. It's tough to build a comic book movie with a villain the audience is indifferent about.

Other roles were cast much better. I like Sam Elliott in most anything, and he does a great job as Carter Slade, as he usually does with Western themed characters. Peter Fonda's turn as Mephistopheles is also memorable.

Now, we get to the CGI, which for the action scenes is incredible. When riding or fighting, the Ghost Rider looks great. When speaking and trying to be menacing, the CGI fails completely. Here's why I say some things are better left to comics, or at least animation: A live action skull just can't be expressive in any way. No matter what the lines are, the skull looks the same. At times it's downright silly, especially when the witty repartee is like the first meeting of Ghost Rider and Blackheart. Ghost Rider: "You're going down." Blackheart: "I don't think so." Man, where's Spider-Man when you need him?

I wouldn't say that "Ghost Rider" is a horrible movie. There were some funny bits, the action sequences were very cool and I actually enjoyed it in a shut your brain down and watch kind of way. It is, however, definitely one of those middle-ground productions that will probably be enjoyed much more by fans of the comic than those unfamiliar with it.