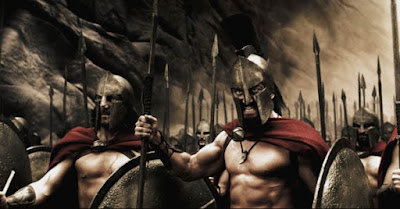 Truthfully, I could leave my review at that and it would be entirely accurate. Of course, that wouldn't make for very good reading, would it?

There's always this little tinge of apprehension when I approach a Hollywood adaptation of something I know and enjoy, whether it be a favorite book, comic or graphic novel. Tinseltown isn't known for its faithfulness to the source material, and in many cases will just downright destroy a good thing. So even having seen the fantastic previews of "300" and having heard nothing but good things about it from people whose opinions I trust, I wondered if it could really match Frank Miller's graphic novel. Like "Sin City" before it, the answer is a resounding "yes."

Films that blend CGI and live action as liberally as "300" does have been a mixed bag in the past, but this movie gets it entirely right. The CGI creates a sense of unreality that makes the movie feel like Miller's comic book. The live action performances give it the grit that's required for the brutal battle scenes that make up the movie.

Critics, of course, had plenty of bad things to say about the movie, and I have to roll my eyes when I hear complaints about the movie putting style and action ahead of the story. I mean, the style and action are kind of the whole point here. Like Miller's graphic novel, this adaptation of "300" is a visceral display of the kind of unflinching machismo that most men, whether they're willing to admit it or not, wish they could achieve.

You don't see this kind of movie looking for a deep statement on the human condition. What you want in "300" is exactly what you get - some of the most epic and breathtaking battle scenes ever put on film, great one-liners and heads flying. You want something that speaks to that archaic, chest-beating, testosterone-fueled warrior that still lurks somewhere inside. You want a movie that makes you want to grab a sword and dive into the enemy ranks, even though most of us know realistically we'd get our soft butts kicked before the blade cleared its sheath. "300" delivers that and more.

Want a movie that dissects the whys of war and makes a statement on it? Pick up something else. Want to revel in the bloodlust of one of the best action films in recent memory? Grab some popcorn, sit back and enjoy.

Get "300" or the 2-disc special edition.
Posted by Fred Phillips at 12:41 AM
Labels: Action, Fantasy, Movie reviews