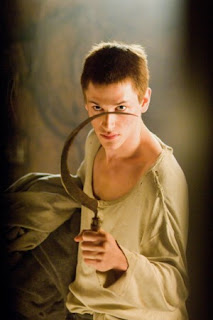 One thing that Thomas Harris seems to have forgotten in his last two novels and screenplays about cannibalistic killer Hannibal Lecter is what made Lecter such a fascinating character in the first place - his personality and the performance of Anthony Hopkins.

It's much more chilling to hear the smooth, smiling Lecter talk matter-of-factly about eating someone's liver with some fava beans and a nice Chianti than to actually watch him do it.

That was the problem with "Hannibal" and also with "Hannibal Rising," which tells the tale of the young Lecter and how he came to be Hannibal the cannibal.

It begins in Lithuania during World War II, when Hannibal is a small child. The Nazis and the Russian army clash on his family's land, resulting in the death of his parents and leaving Hannibal to fend for himself and his younger sister. When a band of rogue locals who have been denied entry to the SS come calling at the house where Lecter and his sister are hiding, things get worse - much worse.

We're then introduced to the teenage Hannibal, who escapes from the orphanage that used to be his family's home, sneaks across the Soviet border and winds up with an aunt by marriage who lives in Paris. Lecter starts a new life and begins medical school, but he hasn't forgotten the horrors of the war, seeing the men who tormented him in his dreams every night.

"Hannibal Rising" is a far superior movie to "Hannibal," but it still doesn't stack up to either "Red Dragon" or "Silence of the Lambs." This is a brutal vision of the young Lecter, far from the suave mastermind of his later years, though he does occasionally show the tendency toward the killer he'll later become (the last scene in the film, in which the violence isn't shown, is perhaps the most Lecter-ish moment.)

Gaspard Ulliel steps into some big shoes taking on the role of Lecter, and handles it well. While he portrays a younger, more brash and less scheming Lecter, we do see him develop the cold charm and show flashes of Hopkins' famous portrayal. Ultimately, though, he's stuck in what is more or less a gory revenge tale. While it shows us Lecter's origins, it offers little insight into the character once he has that revenge. To me, the more interesting tale may be the transformation from the angry young man bent on revenge to the cold habitual killer of "Red Dragon" and "Silence of the Lambs," and it might offer more of those things which make "Silence of the Lambs" a creepier film.

"Hannibal Rising" is an enjoyable enough revenge tale, but in a couple of years when I'm flipping channels and see it on TV, I'm not likely to stop and continue watching the way I will when I see "Silence of the Lambs."

Get the "Hannibal Rising" DVD.

Get the novel.
Posted by Fred Phillips at 12:58 AM
Labels: Horror, Movie reviews