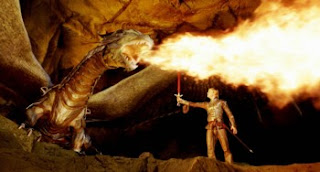 The advances in fantasy movies in recent years have been amazing. I remember sitting through a lot of truly awful fantasy films over the years, longing to find one like Peter Jackson's adaptations of "The Lord of the Rings" or some of the "Harry Potter" adaptations. The technology now has gotten so good that even a mediocre fantasy film can be impressive.

It's unusual for me to not have read a book before I see the movie, but for some reason, I just never got around to picking up "Eragon." I had a vague notion of the plot, but didn't really know what I was getting. The film starts well enough. Some might fault it for the typical "farmboy with hidden greatness" plot, but it's a staple of the fantasy genre and still very viable when done correctly.

Visually, the movie is very good, even if it borrows more than a few camera shots and digital sets from "The Lord of the Rings." The dragon Saphira looks great both on the ground and in flight, and the climactic aerial battle between Eragon and Saphira and the Shade Durza and his nightmare creation is stunning.

The cast also does a good job with what they have to work with. Ed Speleers is appropriately innocent and brash as Eragon, John Malkovich seems to be having fun as the evil King Galbatorix and Jeremy Irons brings some gravity to Eragon's mentor Brom. The problem they have is that toward the end of the movie, the dialogue devolves into a series of clichés. Combined with the digital backdrops and camera shots that should have Jackson on the phone with his lawyers, it really took me out of the flow of the movie because I'd laugh a little every time I saw one.

"Eragon" isn't a bad movie, but it isn't a great one, either. It has a lot of nice eye candy, which distracts from a mediocre script. A common complaint I see from fans of Christopher Paolini's books is that the script takes much of the depth of the story away. I can't say either way since I haven't read the book, but I can say the movie certainly doesn't compel me to run out and get a copy of the book.

"Eragon" is a fun way to pass an hour and a half, but when the credits roll, it's not one of those recent fantasy movies that leave you thinking, "wow, I can't wait to see that again."