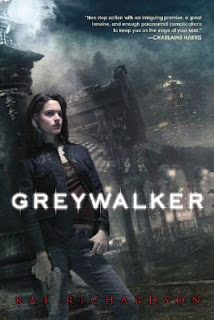 She was finishing what she expected to be a routine case by confronting the perpetrator of a petty fraud. Things go awry when the suspect goes crazy and beats her to death. For two minutes, Harper is officially dead before being revived by paramedics, and then things get weird. Her experience has given her the strange abilities of a greywalker, someone who is able to see ghosts and even cross over into their world.

Shortly after being released from the hospital, she's back on the job working two cases. One, finding the son of a rich socialite who has disappeared from college. The other, finding a parlor organ for a mysterious client. Both prove to be much more than Harper could have ever planned for.

I've become quite the fan of these supernatural detective stories over the past few years. The best ones get the action started early and keep it fun. That's perhaps the only problem with Richardson's debut. A lot of time is spent trying to explain Harper's abilities and showing her learning to use them, and in the early going it gets bogged down a little in the technicalities. Most folks who are going to pick up this book will be willing to accept her abilities and learn as they go along instead of having them explained.

About halfway through the book, when Harper finds her missing person, business picks up and from there the book moves at a much faster clip and heads in a direction that fans will be much more familiar with.

Richardson's story is well done and enjoyable, though I have to admit that I had a bit more trouble identifying with Harper than similar characters in other authors' work. I do like the fact that Richardson's heroine doesn't have to jump in bed with every supernatural character that walks through the door, as often happens in these tales.

"Greywalker" is an intriguing debut, and I'll be very interested to see what Richardson does with the next installment now that the groundwork is done.