Review: "All Together Dead" by Charlaine Harris 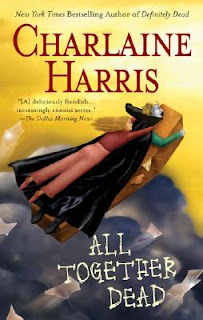 Charlaine Harris' Southern Vampire series continues down a darker road in the latest installment, "All Together Dead" ($24.95, Ace).

For those unfamiliar with the series, the main character Sookie Stackhouse is a no-nonsense northern Louisiana girl who also happens to be a telepath. She's caught the attention of the vampires, who have recently gone public about their existence, and they continue to call on her services. This time, she's been hired by Sophie-Anne Leclerq, the vampire queen of Louisiana, to travel to what amounts to a vampire convention in a Chicago suburb so that she can scan the minds of other humans and give the queen an edge.

Sophie-Anne, still reeling from the blow of Hurricane Katrina, is scheduled to face trial in the death of her husband, the king of Arkansas. When they arrive at the pyramid-themed vampire hotel, though, vamps begin dropping like flies all around them, and Sophie finds herself caught up in a series of vampiric power plays. Then, of course, there's the ever-present threat of the Fellowship of the Sun, a group of radical humans who want to destroy the vamps.

Harris' series began as a fun romp through a world filled with vampires and good ole boys. With each installment, though, it's gotten slightly darker. While there's still plenty of fun and humor in the early-going here, the final third of the book becomes pretty disturbing. The post-Katrina pall hanging over the book and the climactic scenes which are disturbingly familiar in the age of terrorism add to the bleak ending which will leave readers unsure whether they still like many of the characters, Sookie included, as much as they did before.

While fans may miss the fun, flippant side of the series a little, "All Together Dead" offers a bigger punch in the gut and asks some tougher questions of us than previous installments. It's a more grown-up offering with a less rosy outlook on humanity.