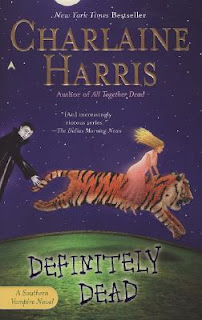 Editor's note: This is another of those housecleaning reviews. I plan to review Harris' latest in the near future.

Charlaine Harris' latest novel about the strange happenings in the small northern Louisiana town of Bon Temps almost got blown away by last year's hurricanes. In a foreword, Harris explains that after watching the devastation, she considered shelving "Definitely Dead" ($23.95, Ace) because much of the action takes place in pre-hurricane New Orleans.

Ultimately, she decided to go ahead with the book, and fans will be glad she did. This time around, telepathic barmaid Sookie Stackhouse has just found out that her cousin Hadley, who had become entangled with the vampire queen of Louisiana and had become a vampire herself, has been killed - permanently, this time - in New Orleans. She's escorted to New Orleans by the queen's lawyer to close out Hadley's estate, but there are much stranger things afoot in the Big Easy.

First, there's the discovery of a freshly-made, blood-starved vampire in Hadley's apartment. Then there's the mystery about her death, which just happened to coincide with the queen's marriage to the vampire king of Arkansas, not to mention the attempts being made on Sookie's life by a small group of weres and a revelation about former vampire boyfriend Bill that shakes her world.

There's a lot going on in "Definitely Dead," perhaps more than in any of Harris' previous Southern Vampire novels, and while many of the happenings don't seem to play into the story at hand, the reader has the feeling that the details may be important in future installments. Certainly many of the events from previous volumes play into this book, and though Harris tries to recap as much as possible, readers will probably be a little lost if they're not familiar with the back story.

A welcome change in this book is the lessened focus on Sookie's love life. While it still plays a major role with the revelation about Bill, a new weretiger beau named Quinn and continuing problems from a previous relationship with Shreveport werewolf Alcide Herveaux, there's less her of fretting and worrying about it and more focus on the situations at hand.

Harris has yet to disappoint in this series. As with past volumes, "Definitely Dead" is fun, fast, filled with interesting characters and a particular treat for those of us who live near Bon Temps.