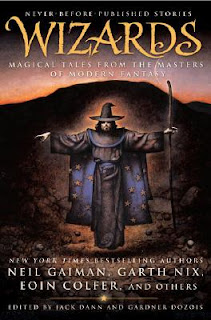 "Wizards" (Berkley, $25) bills itself as a collection of stories by "masters of modern fantasy," and it lives up to that billing.

Almost every author contributing to the book will be well-known to fans of fantasy fiction, ranging from masters like Neil Gaiman and Orson Scott Card to relative newcomers like Eoin Colfer.

Wizards, of course, are a staple of the fantasy world, and almost every different kind of magician imaginable is featured in this collection from the all-powerful to the mere illusionist.

There are warm-hearted and whimsical stories like Neil Gaiman's "The Witch's Headstone," which finds a young resident of a graveyard who can speak with the spirits attempting to buy a headstone for an accused witch buried anonymously, or Colfer's offering, "A Fowl Tale," about a talking dove who backs himself into a corner while trying to spin a tale for his supper. Even the normally dark Tanith Lee takes a light approach on "Zinder," about an abused and mentally impaired man who soars the night skies making things right.

Darker tales do appear. Mary Rosenblum's creative "Color Vision" features a wizard hunting young people with the talent to gain their power. The wizard in Elizabeth Hand's "Winter's Wife" uses her magic to avenge a greedy man's act against the natural beauty of her new home. Peter Beagle's "Barrens Dance" features one of the few truly evil wizards in the collection, a man intent on winning the love of a woman he can't have, through any means he can. But even these stories usually end well, if not always entirely happily.

There are tales that play on legends, such as Garth Nix's "Holly and Iron," drawing on a number of different European tales, including King Arthur. Jane Yolen' s "Slipping Sideways Through Eternity" even places the prophet Elijah in the position of wizard.

Perhaps the strangest story (and title) is Andy Duncan's "A Diorama of the Infernal Regions, or the Devil's Ninth Question" which finds a young girl jumping into a diorama and finding herself in a house where she'll face the devil himself.

There are a few forgettable stories in the mix, but very few. For the most part, this is a collection of writers doing what they do best. The stories are entertaining and offer a wide variety of styles and wizards to suit most any taste. "Wizards" is a good way to sample some of the best writers in the genre today.