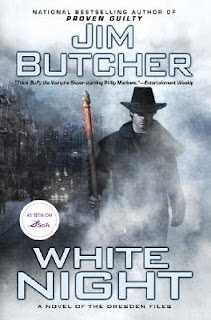 It's not often that the ninth book in a series is still as lively and engaging as the first. It's even rarer for a series to be continually getting better over the course of that many books. But Jim Butcher has managed it with his supernatural detective series The Dresden Files. The latest, "White Night" (Roc, $23.95), is one of the best.


The books center on Chicago's only wizard for hire, Harry Dresden. He's part Mike Hammer, part John Wayne and part Merlin, with better wisecracks than any of them. He's also surrounded by a cast of characters just as colorful as he is, from the cute but tough-as-nails police sergeant Karrin Murphy to the ruthless and despicable, yet somehow likeable, gangster "Gentleman" Johnny Marcone.


This time around Harry gets the call from Murphy to investigate what appears to be a series of suicides, but some of the facts don't add up. When Harry discovers a magical message, Exodus 22:18's "suffer not a witch to live," left at the scene of a couple of the suicides, Murphy's fears are confirmed. There's a serial killer in town, targeting witches. Making matters more difficult, the suspected killer has been seen wearing the gray cloak of a Warden of the White Council, the magical police force that Harry just happens to be a member of, and several of the women have been seen in the company of a man matching the description of Harry's brother Thomas.
Oh, and don't forget the ongoing war between the White Council and the Red Court of vampires, or Harry's struggle to reign in his headstrong goth girl apprentice, or the reappearance of another wizard for hire who happens to be Harry's ex, or the fallen angel Lasciel, who is trapped in Harry's head.


So, yes, there are a few things going on in the book, but Butcher, as always, juggles them well, weaving all the threads into a cohesive story that includes some thoughtful observations on human nature among the magical battles and zaniness that surrounds Harry.


Dresden recently received the TV treatment from the Sci-Fi Channel, as the first season of "The Dresden Files" ended, but the show has little to do with the books other than the main characters. Butcher's version is far better.