Review: "The Willful Princess and the Piebald Prince" by Robin Hobb 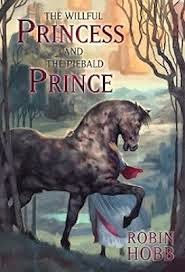 As I await the release of “Fool’s Assassin,” the latest tale of Fitzchivalry Farseer from Robin Hobb, I decided to step back into that world briefly for her novella “The Willful Princess and the Piebald Prince” ($4.99, Subterranean Press).

The brief tale provides us the backstory of the Piebald Prince as told by the nanny who raised him. The history told by the victors says that Charger Farseer was a pretender to the throne who used the now-reviled Wit magic and was ousted by nobles to remove the taint from the Farseer line.

We’re assured by our narrator Felicity, though, that this is the unvarnished truth about the rise and fall of the Piebald Prince, and it tells quite a different story.

In this tale, noble jealousy rears its ugly head when Charger, a bastard son of Queen-in-Waiting Caution, is named heir to the throne, resulting in the eventual ouster and disgrace of the Piebald Prince.


The story should be enjoyable for fans of Hobb’s Farseer tales and a nice appetizer for “Fool’s Assassin.” It’s important to note that this tale doesn’t have the breadth or depth of the books that we are used to from Hobb. It’s a simple retelling of the tale by someone who lived through it, and Hobb gives over to Felicity’s voice and viewpoint.

It’s a quick read, and to be honest, I wish I had discovered it when it was released last year. As it is, though, the timing is perfect since “Fool’s Assassin” sits at the top of my to-be-read list.