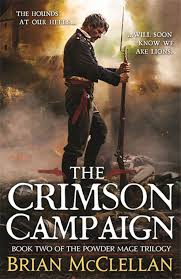 “Conventional wisdom” often holds that the second book of a trilogy will be the weakest, as it’s usually a bridge between the beginning bang and the big conclusion. So much for conventional wisdom.

Brian McClellan’s “The Crimson Campaign” ($26, Orbit) is the rare middle book that not only lives up to the first, but surpasses it.

In “Promise of Blood,” McClellan introduced us to an intriguing magical system with his powder mages – wizards who burned black powder to fuel their magic. In “The Crimson Campaign,” that novelty has worn off a bit, but McClellan one-ups himself with exceptionally compelling drama.

The book opens with the Kez army gathered en masse at the Adran border, as Field Marshal Tamas attempts to hold them off with a much smaller army. Tamas believes that his son and war hero Taniel Two-Shot is in a coma after a massive explosion resulting from Taniel shooting, and supposedly killing, the god Kresimir. In reality, Taniel is trying to drown his sorrows with a drug known as mala.

Meanwhile, Inspector Adamat, employed by Tamas to root out traitors in his alliance, is dealing with his own issues. A powerful man known as Lord Vetas is holding his family hostage, and he’ll be forced to attempt a daring rescue with a handful of Tamas’ men, while also maneuvering his way through the political wrangling in the capital city of Adopest.


Things take a dark turn when Tamas decides to make a daring move against the Kez in an effort to rout them and end their siege. The field marshal and his two best battalions are trapped behind enemy lines and must fight their way back to Adro. That brings Taniel and his mysterious magic-using companion Ka-Poel back to the front, but he finds a very different military from the one he left and suspects that something more sinister than incompetence is at play.

You know that an author has got you hooked when you’re turning pages with an equal measure of anticipation and dread. I spent most of this book with those warring emotions. The story compelled me to move forward beyond the next page and beyond my bed time, but, at times, the situation seemed so dire for the characters that I almost didn’t want to know what was going to happen on that next page. It’s a sure sign that the author has managed to create characters that come alive and find a place in your heart.

Plenty of books have characters that I care about. But it’s a very rare story and writer that can put me close enough to those characters to put a knot in my stomach as I read. McClellan has done a magnificent job of it.

“The Crimson Campaign” is far more than a set-up book for the finale – “The Autumn Republic,” due in February – though it does a great job of that, as well. A few of the major mysteries left over from “Promise of Blood” are resolved by the end, but just as many more are opened up. It all gives you the feeling that all Hell is about to break loose in the final volume and anything could happen.

“Promise of Blood” was one of my favorite reads from 2013, and “The Crimson Campaign” is, at this point, head and shoulders above anything else I’ve read from 2014. It’s a damned good book, and if you haven’t checked out McClellan’s work, you should.