Review: "The Rose and the Thorn" by Michael J. Sullivan 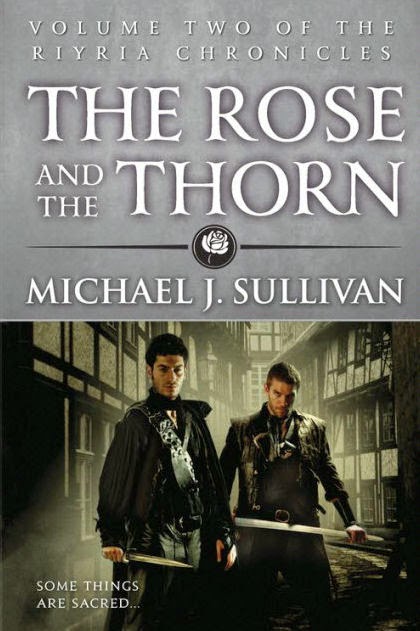 I’m not usually big on prequels. In most cases, I think it takes some of the suspense and tension out of the story because you know what happened. I’ll make a very big exception for Michael J. Sullivan’s “The Rose and the Thorn” ($16, Orbit), though. Not only is it a great prequel, but one of the best books in his Riyria series.

We rejoin Hadrian and Royce during the uneasy tension of their early days together, as Hadrian tries to prove to Royce that people are basically good and Royce tries to prove his position that everyone is selfish and uncaring. The book opens on this note as Hadrian pauses to help a woman who says she needs a drunken, threatening man removed from her barn. That man proves to be none other than Viscount Albert Winslow, and the woman, well, let’s just say she’s not as helpless as she pretended.

That sets the stage for the birth of Riryia. The pair heads back to Medford House to visit their friend Gwen DeLancey only to be shockingly turned away. They find themselves across the street at the establishment of the girls’ old boss Grue, where they find that Gwen was brutally beaten on the street. That sets Royce on a course of vengeance that will alter the political landscape and set some of the events of the Riryia Revelations into motion.

In recent years, Sullivan has become my go-to writer when I’m in the mood for some swashbuckling, old-school fantasy adventure. There’s still a bit of that in “The Rose and the Thorn,” but it’s a much darker book than some of his past works.

We’ve heard about Duster, Royce Melborn’s dark and twisted alter ego, but we’ve never truly seen him in action – until now. The events of “The Rose and the Thorn” make it very clear exactly what Royce is capable of and exactly the kind of person that he might have been before the influence of Hadrian. I’m not sure what this says about me, but Royce moved quite a few notches up my favorite fictional characters list with this tale.

Another character that we get more insight into is Reuben Hilfred. The warrior gets the spotlight treatment in this book with a fascinating story that we would not have gotten without the prequels. His tale of rising from an awkward boy, bullied by his peers and abused by his father, to protector of the Princess Arista Essendon will give you a whole new appreciation of a character you might have underestimated in Sullivan’s previous books.

I’ll admit that I had some misgivings about prequels, but Sullivan continues to deliver exciting, tightly plotted stories that reveal the depths of familiar characters and also open up new and interesting stories about some of the people surrounding Royce and Hadrian. “The Rose and the Thorn” is easily one of the best installments of the series to date.