Review: "The Serpent of Venice" by Christopher Moore 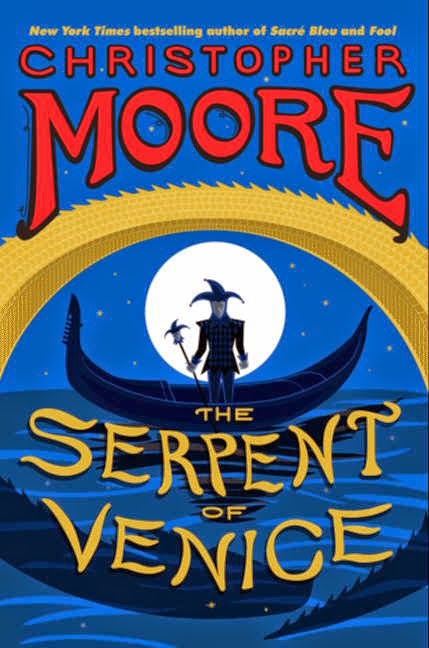 Christopher Moore returns us to the tale of Pocket, his version of King Lear's Fool, "The Serpent of Venice" ($26.99, William Morrow).

Pocket, now known by many in Venice as Fortunato, remains in mourning for his beloved Cordelia. He's invited to the home of an acquaintance, Brabantio, known often by his title Montressor, to his home to try a rare wine. Brabantio is upset because his daughter Desdemona has married the Moor general Othello. It was Pocket who defended Othello when Brabantio went before the council to try to break up the marriage and accuse the Moor of taking his daughter by magical means. Pocket ends up drugged by Brabantio and his cohorts Iago and Antonio and bricked into a wall in Montressor's crypts, a seeming end to the bawdy fool, until he receives a strange visitor.


Meanwhile, Brabantio, determined that his other daughter Portia will marry better, has set a test for suitors to her hand. They must first pay a 3,000 ducats for the opportunity to choose one of three boxes filled with lead, gold or silver. If they open the one with her portrait, they have her hand. When Brabantio meets an unfortunate fate, Othello is heir to his seat on the council. Antonio and Iago begin to scheme to marry their man Bassanio to Portia and have a member of the council in his pocket. Unfortunately for Antonio, his fortunes are at sea, so he has to approach the Jew Shylock for a loan. Shylock, now working with Pocket, who Antonio and Iago believe dead, demands the famous Shakespearean pound of flesh as collateral against the loan. And things get stranger from there.

So, if you're familiar with Shakespeare, or Edgar Allan Poe, you know that Moore has a lot of irons in the fire here. He's mashed up "The Merchant of Venice," "Othello" and "The Cask of Amontillado" into a wild and crazy quilt of a story that also plays fast and loose with other works. Heck, there's even a tip of the hat to Dr. Seuss toward the end of the story.

While he does poke fun at Shakespeare and Poe, there's also something of a reverence in the works. That's most apparent late in the book during the court scene where Shylock tries to claim his pound of flesh. Though there are, naturally, a few dirty jokes interjected by Pocket, the scene also retains a bit of the drama and meaning of the original.

In true Christopher Moore fashion, "The Serpent of Venice" is vulgar, bawdy and, quite honestly, hilarious. It's difficult to make me laugh out loud when I'm reading a story, but Moore does it often.

That said, I didn't think this was quite up to the level of Pocket's first adventure, "Fool." While still funny and entertaining, I felt at times that Moore might have been trying to juggle a few too many balls. He did introduce a few new characters that I'd like to get to know a little better, in particular Shylock's daughter Jessica, who for a time in the book fancies herself a pirate. She seems like a fun sort who could provide a good foil to Pocket if Moore intends to continue his story. I hope he does.

While not as good as "Fool" in my mind, I still greatly enjoyed "The Serpent of Venice" and would like to see Moore tackle a few more classic tales in his own special way.