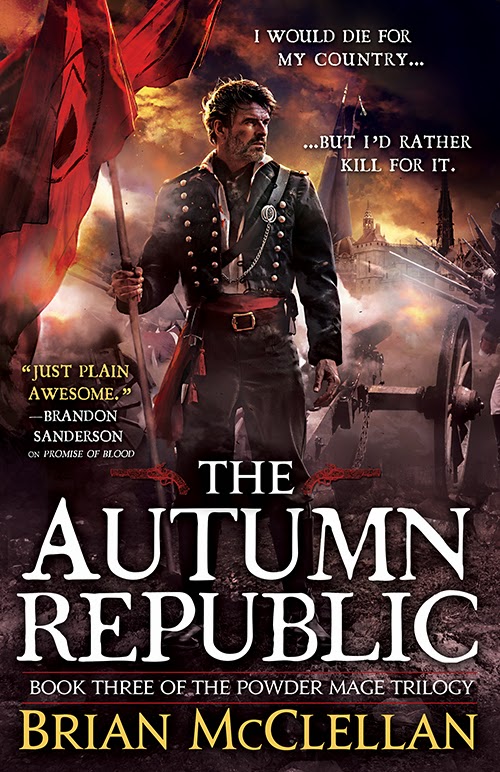 Field Marshal Tamas has fought his way through the Kez army and across inhospitable terrain to return to Adro after being caught behind enemy lines, but what he returns to is a country in chaos in “The Autumn Republic” ($26, Orbit), the final volume of Brian McClellan’s Powder Mage trilogy.

When Tamas returns to the capital city of Adopest, he finds it controlled by Brudanian troops, it’s once-magnificent temples smashed to rubble and the scheming Lord Claremonte facing off against Ricard Tumblar, a member of Tamas’ council, in the city’s first election. It's an election that his own coup set up, but it could now turn disastrous for his country.

Tamas has no time to set things right in Adopest, though. The Kez on Adro’s borders remain a larger threat than Claremonte, and in his absence he soon discovers that his troops have fallen into chaos and treachery.

If that’s not enough, his son, Taniel Two-Shot, was captured and tortured by the Kez god Kressimer, but escaped. He and his companion Ka-Poel, a savage magician, are now trapped in Kez territory. Tamas will need Taniel, and every friend and supporter that he has left, to save Adro.

If you thought the first two books in McClellan’s trilogy were action-packed, you haven’t seen anything yet. “The Autumn Republic” starts strong and carries the reader on a sprint to the finish, with rarely a moment to stop and take breath.

Many wheels are in motion and gaining momentum, and there are still a few surprises to be revealed as the story rushes to its final scene. McClellan continues to mix in different elements well. There is, of course, plenty of action, adventure and strategy as Tamas matches strength and wits with the Kez leader Ipille.

Inspector Adamat’s storyline also continues to add some mystery and intrigue into the mix as he investigates an attempt on Ricard’s life and tries to determine exactly who the mysterious Lord Claremonte is.

And there’s even a bit of romance, though if I’m being honest, I have to admit that the love triangles got a bit tiring for me in this volume, and I just wanted to get back to the action and intrigue.

Amid all of the battles and betrayals, McClellan also does a fantastic job of keeping the reader connected with his characters and invested in their fates. As in past books, the parts of the story that look the most bleak for those characters we’ve come to care for deeply are gut-wrenching. It was the novelty of the magic system using gunpowder that drew me into this trilogy, but it was the characters that made it a favorite.

“The Autumn Republic” provides an outstanding conclusion to an outstanding trilogy. Though the story is done, there still remain a few loose ends and interesting possibilities, and a hope that maybe McClellan will return to the world of the powder mages at some point. Either way, I look forward to whatever he does next.