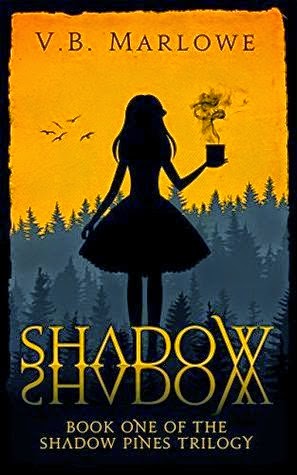 There’s probably never been a better time, or perhaps, a worse time for indie and self-published authors. On the one hand, it’s now easier than ever to see your story in print and promote it. On the other, that same ease has created a glut of books, most of them pretty bad, that may make people less likely to pick up an indie or self-published title.

I’m guilty myself of often dismissing books that don’t come from a big publisher because of past experience. Every now and then, though, something catches my eye and draws me in.

I’m not sure exactly what it was about V.B. Marlowe’s “Shadow, Shadow” ($11.99, All Night Reads) that drew my attention – probably a combination of the title, the cover and the description – but I’m glad it did.

Marlowe introduces us to the small town of Shadow Pines and four teenagers who, at first, seem very different – Harley, the misfit punk girl; Teaghan, the quiet mousy type; Brock, the most popular boy in school; and Gianna, the activist. All, though, share a birthday and receive a mysterious gift from the new novelty shop in town.

Shadow Pines has a history of an unusual number of unexplained disappearances. Most of the townspeople blame them on a reclusive resident known as The Snatcher. Ava-Kaya, the owner of the novelty shop, though, says it’s the shadows that take people. With the boxes she gives the teens, she tells them they can trade a person of their choosing to the shadows, never to be seen again.

The gift comes with a catch, though. If they don’t use the box, the shadows will claim someone they love.

With a half-dozen or so big publisher books sitting in front of me that I wanted to read, I decided to crack open “Shadow, Shadow” and read a few pages to just give it a chance. I didn’t need that many. I was hooked from the first scene, and my attention never wavered from the relatively short novel until the finish.

Marlowe has a rather simplistic writing style, but it really worked for “Shadow, Shadow.” The story moves along at a breakneck pace, and is driven by the characters of Harley and Teaghan, who admittedly can be annoying at times (they are teenagers after all), but are mostly pretty likeable.

I could certainly nitpick the book a bit. There were a few editing errors here and there, and I thought some of the plot elements could have been developed a little more fully to give the story a bit more depth. That said, I enjoyed it without those touches. I’ve always said that an intriguing story is the main thing that I look for in a read, and all other considerations are secondary. “Shadow, Shadow” proves that. I was drawn in immediately and couldn’t wait to find out what happened next.

A word of warning, though: “Shadow, Shadow” probably qualifies more as a serial than a stand-alone novel. The book leaves the reader hanging on several points. We’re still unsure what that first scene that hooked us was really about, though we can certainly speculate, and the mystery of the town and its disappearances is only just beginning to unfold.

“Shadow, Shadow” is a quick, fun read that’s full of charm, and I can’t wait to visit Shadow Pines again.