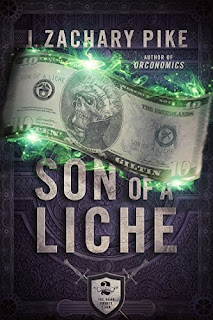 The outlaws may have the secret to stopping both threats, but they’re not going to make any friends among the world’s powers that be by doing it.

“Orconomics” was just the shot of fun and excitement that I needed in a sort of blah reading year for 2018. “Son of a Liche” didn’t make me laugh out loud quite as often as its predecessor, but it was still highly engaging and entertaining.

The rapid-fire references to other works fly here, just as they did last time out, and they’re a blast to pick out. There’s a particular tribute to “Monty Python and the Holy Grail” that had me rolling. I’m sure I also missed as many as I picked up on.

The satire is sharp as well, with Pike riffing on a number of levels. Who would have thought that financial humor and fantasy would blend so well? But it does. Pike takes plenty of jabs at Wall Street, in particular playing on the bank collapse of 2008 as the banks of Andarun write plenty of checks that they can’t cash. But if the only financial joke you know is your bank account, there are also some good-natured swipes at gaming and fantasy conventions to enjoy.

Given the nature of the Dark Profits Saga, it would have been easy for Pike to create cardboard archetypal characters to deliver the jokes. Certainly, they fit the archetypes, but there’s nothing cardboard about them. But just as in “Orconomics,” I’m impressed with the character development and depth. Like the best humor writers, he knows great characters delivering the jokes make them that much better.

“Son of a Liche” didn’t deliver the dramatic gut-punch moment of its predecessor, but there are still some pretty heavy human moments. It’s not all fun and games, but that’s one of the things that I’ve loved about these two books. You’re engaged with the characters and affected by what happens to them. There’s far more to them than a few chuckles.
Posted by Fred Phillips at 4:11 PM
Labels: Book reviews, Comedy, Dark Profit Saga, Dwarves, Elves, Fantasy, J. Zachary Pike, Magic, Thieves, Zombies