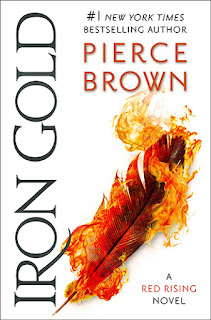 Darrow is also tired and determined to win the war once and for all. To that end, he drops an iron rain on Mercury, in direct defiance of a senate order to stand down, and plans to take the battle to Venus to put an end to the Ash Lord once and for all. His actions, though, set events in motion that may turn the republic’s greatest hero into its most-wanted outlaw.

Brown says in the afterword that he thought Darrow’s story was over after “Morning Star,” but clearly there’s more to tell. “Iron Gold” does, however, mark a shift in the story. Previously the tale of Darrow told through his eyes, this book gives us multiple new viewpoints – Ephraim ti Horn (former member of the Sons of Ares turned thief), Lyria of Lagalos (a red from the mines of Mars who has found life after “liberation” not as promised), and Lysander au Lune (grandson of the deposed Sovereign Octavia au Lune).

I admit that I was nervous about the shift. The last time the author of a series that I enjoyed moved to different viewpoints, it didn’t end well. At least in the early-going, though, Brown handles it deftly by giving us three very strong characters to root for, even if at least a couple of them aren’t exactly “heroes.”

Brown also fairly deftly handles the politics of the books. If you’ve read my reviews, you probably know my stance on injecting current politics into my fantasy and science fiction, but you also know going in that Red Rising is and has always been a political story and is going to have some parallels. For the most part, it’s well done, though there was one scene, more of an aside, that I felt was a bit contrived to make a statement. It was brief and easily forgiven with the strength of the rest of the story.

“Iron Gold” delivers exactly what I expect from Brown and a Red Rising story – colorful characters, fantastic battles and tension that you can cut with a knife. In a 2018 filled with DNFs, I’m left wondering why I didn’t get to this sooner. I won’t make that mistake with “Dark Age.”
Posted by Fred Phillips at 1:35 PM
Labels: Book reviews, Pierce Brown, Red Rising Trilogy, Science Fiction

Hi there, just wanted to say, I loved this blog post.
It was inspiring. Keep on posting!